Posted by Kimberly Capehart at 7:55PM 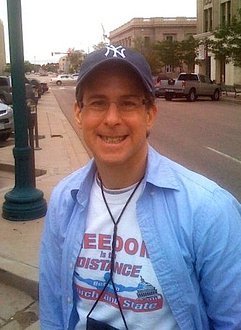 Professor Steven Ginsberg is the closest thing to a celebrity that has ever attended the Finger Lakes Environmental Film Festival.

Coming all the way from Los Angeles, California to serve as a moderator for various post-screening discussions during this year's festival, he is, in fact, no stranger to film festivals. Ginsberg, who currently serves as the Chair of the James B. Pendleton Center at the  Ithaca College Los Angeles Program, previously served as the program's Professional-in-Residence and has a lot of experience in the film and television industries. A screenwriter by profession, he served as the associate producer of the film Family Prayers and has his name attached to such works as Lord of the Rings: Return of the King, Elf, and Bill and Ted's Bogus Journey.

His film, Family Prayers, was screened at the 1992 Palm Springs Film Festival and the 1993 Seattle International Film Festival, shortly after its release. Additionally, Ginsberg has served as a guest lecturer at FLEFF in both 2007 and 2008.

Though his work has reached nearly every corner of the country, Ginsberg says he still enjoys coming to FLEFF because the collegiate environment promotes a more intellectual atmosphere than other film festivals that he has attended. He notes that he likes discussing and debating film with other cinephiles in a friendly community setting because it fuels his inspiration.

"I think film festivals are important meeting places, because they allow viewers to see movies that would just pass by otherwise; as a movie maker, it's tremendously important to have a place to see films," says Ginsberg. "I also think it’s important to meet people. Part of the arts is not just getting projects off the ground, but being artistically motivated and inspired," he concludes.

Come down to Cinemapolis this week to engage in intellectually-stimulating conversations and let yourself be inspired!