Posted by Amber Thibault at 9:51AM 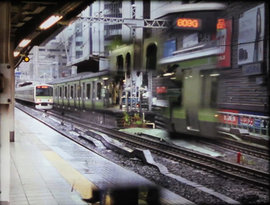 This is the idea behind Tomanari Nishikawa's film "Tokio-Ebisu" which explores the movement and repetition of people and trains on the Yamanote Line.

Nishikawa share with me his recollections of taking the Yamanote Line, the busiest train in Tokyo. This train runs on a loop and and arrives at a train station every two to three minutes. It is in observing this that he notice the repetition that inspired his film; a train would come every couple minutes and stopped in the exact same spot. He also observed that everyone on the platform knew exactly where it was going to stop so they would line up accordingly.

But the technical elements of filmmaking are more compelling to Nishikawa than the storyline.

Nishikawa: "You can tell a story through multiple ways, writing or speaking but film is unique in what you can do with it."

He experimented with exposing the camera to observe what was happening in front of it. Get shot was exposed 30 times! It is this that makes me excited to see it. I can't actually wrap my mind around what that would look like.

Nishikawa's love for the medium of film was apparent in our conversation and contributes to his style. Some of his works can be seen at his website, www.tomonarinishikawa.com

Cinemapolis will be screening his film "Tokio-Ebisu" as part of the Upstate Filmmaker's Showcase this Sunday, April 7th at 4pm.

This is Nishikawa's first time being a part of FLEFF and he was pleasantly surprised to find out FLEFF does not feature just environmental documentaries but has a a selection of non-narrative films as well.

What was your first impression of FLEFF?