Posted by Gabriella Sophir at 6:27PM 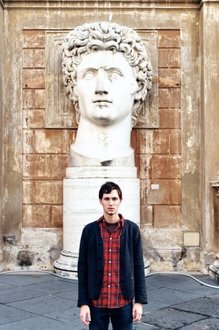 I recently got the chance to speak with Ithaca College Alumni Brian Cicero (‘10) who interned with FLEFF for four years as an IC student and now works as a research and design assistant for Team Umizoomi, a television show on Nick Jr. He shared insight about his experience with the festival and the long-lasting impacts it has had.

Q: Describe your experience as a FLEFF team leader.

A: I had a very positive experience working with FLEFF. The reason I had such a good experience was because of the freedom and responsibility that the leaders of the festival gave to me. They let me take whatever initiative I wanted to as long as I was willing to put in the work.

Q: What did learn from your experience with FLEFF?

I really got to develop myself as a leader-- being accountable for other people, being given a goal and making sure that goal was met. I also got to develop relationships with my fellow interns-- seeing who would want to step up to the plate and learning to give direction to those who needed it without coming off as a jerk.

Q: What is your favorite part of the festival?

A: Being part of the festival is very stimulating-- just being surrounded by activists, artists, writers and others that come to the festival. As a freshman, my experience with independent films was basically Little Miss Sunshine which, in reality, is a Blockbuster film. It allowed me to see strange films about first contact with indigenous people and wars I didn’t even know were going on. Going to these events and meeting these artists enlightens you to what else is out there.

Q: Do you have a personal favorite film or performance that you attended?

A: Yes, I saw a documentary of Jack Smith, an artist in the 1960s and 70s who lived and breathed art and film. He didn’t believe in art as a product, he believed in art as a lifestyle. This man that nobody knows of had a huge influence on Warhol and all the big names we know. More generally, I really enjoyed going to the downtown events. It’s a great way to connect with the community.

Q: Would you encourage students to get involved with FLEFF?

A: Oh yes! It had a tremendous impact on me. I hope to come back this year as a guest and a viewer. I’m very excited to watch the films and go to the lectures!

Any other Alumni or guests out there who had a similar experience? Tell us about it!