Posted by Gena Mangiaratti at 12:58AM 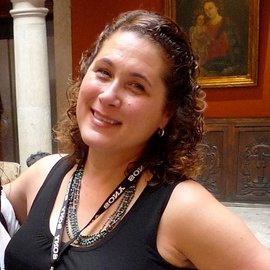 This is part 2 of the Q & A with Helen De Michiel, new media producer of Lunch Love Community. If you haven’t read part 1 yet, click the link below.

GM: Some of your past work has also focused on local topics, such as your 1990 documentary Turn Here Sweet Corn, which was made in Minneapolis at a time you were living there. In Berkeley, where you are living now, you made the Lunch Love Community. How do you decide on which issues to cover in your documentaries?

HD: Yeah. I’m not really coming from a journalism background. I come from an art background, so I don't always just think of “covering” a story, because that's more journalism, which I could have been but didn't. So it's a very mysterious process.

I think what happens, is a person really feels connected to a particular story in some way. They really feel for it. It excites them.

This story, like I said before, was so rich and full of nuances. Plus it had so much to do with children and activism and food — and I kept finding out new things that really intrigued me.

I knew it was something I could stick with for a few years, which is really what it takes to make a film: A long time. It takes at least two years for most people, if not longer. Maybe three to five years for other people.

So you always think to yourself, do I want to live with this for five years, and if so, is there enough there that I can really drill deeply into this story?

For me, a wonderful thing about this particular project is, because it's local to where we live right now, I’m able to really get into the story slowly, and learn about people and talk to a lot of different people, and kind of understand things over time.

What I thought it was about two years ago is not what I think the story is about today.

That's very different than filmmakers or newsmakers who kind of parachute in, do a story, cover it as a segment, and then leave. The Berkeley school lunch program has been covered extensively on the major news network. They’re always doing stories about it, but really it's very superficial.

It takes a long time, just as if you were to write a long magazine article or a book about a particular story. It takes you time to get into it and understand what all the different nuances are and figure out what your storyline is, and your narrative and your theme.

That’s really why I think it’s really great to be able to live somewhere and spend a lot of time with the subject.

GM: When you are creating films about local issues, do you make a conscious effort to try to present the subject in a way that globalizes it?

HD: I think that comes with these kinds of films when you do engagement activities afterwards. In this case, what you'll see in the events in Ithaca are ways that these short little stores inspire conversation among the people in the audience.

That's really their intention — is to inspire conversations.

They say, ‘Well they may have done that in Berkley, but let's talk about a way that we can actually start things going in Ithaca.’ It gets people to open up and talk about their own world and all the different kinds of issues that they may be facing.

It's not really that the film itself is going to show you everything that's going on in the United States in terms of food reform because that's impossible to do.

Really what it's doing is just trying to get people emotionally engaged and interested in something that hadn't occurred to them, and then talk about it and see where it leads them in their real lives.

GM: You made the independent feature film Tarantella in 1995. Can you tell me about the differences between making feature films and making documentaries?

But you have to live in the urban environment where everybody else is working in this industry.

If you make documentary films… it's really wide open and different, in a lot of ways, from fiction filmmaking. It's not so tied to an industry, per say, which has a lot of particular pathways from the creation all the way through the distribution.

Because it's very complex, you have a few more opportunities to live in different places, to find stories that haven't really been told before. I also think you use these other new communication technologies to create work that can be really groundbreaking and different.

I think you can do that with fiction film making as well. It can happen independently, but it's much stronger when it happens within the frame of professionals who work in feature filmmaking rather than just trying to do it on your own.

But with documentary there are communities all over the country of filmmakers who have been doing really amazing work and not needing to live in Los Angeles or New York.

So I think it's a little wider open. At least, it has been for me creatively.

GM: What advice would you offer to college students, especially those who are studying film?

HD: I would say to college students now you're really lucky because the future, for now, online is yours to create.

So I would say there’s a few things.

Don't take the internet for granted. It's free and open now for experimentation and doing these kind of really interesting transmedia projects where you can …do all kinds of mixed media projects, because that's really what people are getting used to.

That’s what they want, and you can affect people all over the world through very strategic use of social media. That's for you to create.

At the same time, we all have to remember that the internet may not always be free. One really important thing is, in order to keep its freedom for you to create and experiment and make projects that really connect people, we have to work on making sure that the internet remains free, and that we always have network neutrality, and the corporations don't try to snatch it away and hold it themselves so that we have to go through gates and pay. If that’s the case, then projects like Lunch Love Community won't be able to exist.

Just think. Think about it because, for example, if we did not have free internet and we only had to go through iTunes, you’d be paying for every single one of these webisodes — even if I didn't want you to pay for them, because that’s the way it's going to be set up.

It's just something to keep in mind for your generation. You want to know a lot about policy. You want to understand where the corporations are headed. You want to make your views known in order to be able to create freely, and construct the next infrastructure that the digital 21st century is going to have.

Save the date!: 12 pm on Saturday, April 16 at Cinemapolis, De Michiel will be screening and discussing the Lunch Love Community, along with chef and cookbook author Julie Jordan and public health professor Stewart Auyash.