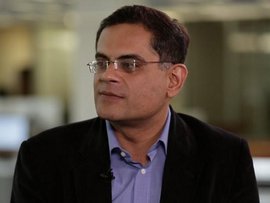 Of the multiple times I have visited Ithaca College’s intimate Handwerker Gallery, its capacity has never felt so full as it did Thursday, March 30 at 6 p.m.

There were a few dozen black chairs angled around a podium illuminated by a lone spotlight. Scholar in Residence, and Pakistani writer Raza Rumi – also hosted by Ithaca City of Asylum - spent the evening reading excerpts from his publications.

Associate Professor in the Department of Writing, Barbara Adams acted as moderator and opened the event by introducing Rumi. She described him as “an invaluable resource to students and the community.” Adams also briefly mentioned the recent terrorist attacks in Brussels, Belgium and Lahore, Pakistan.

Rumi began by reading an excerpt from an article published March 30 in the Indian newspaper, The Hindu. The article is a response to the March 27 bombings in Lahore, Pakistan – Rumi’s hometown.

The publication provides details of not just the bombing, but of Lahore as a city. He recalls visiting the park Gulshan-e-Iqbal, where the attacks took place, as a child with his family. Rumi also points out that terrorism is a pertinent issue. In the last 10 years, over 60,000 Pakistani’s have perished at the hands of terrorism.

The reading of the article itself was powerful due to Rumi’s personal connection in Lahore. Those listening remained silent throughout the reading, engaging in the words he spoke.

Between readings, the audience eagerly participated in a Q&A moderated by Adams.

Rumi answered questions on the media representation of Muslims in the global media.

“The post 9/11 world creates a new kind of Muslim,” said Rumi. “There’s this whole narrative that has been bent, where the ‘Muslim’ is inherently violent and a threat to the world.”

Later, Rumi read excerpts from his forthcoming memoir that deal with the recent events in his life as a journalist and human rights defender. In 2014, Rumi left Pakistan after he survived an assassination attempt in which his driver was killed.

Citing personal memory and loss of homeland, he narrated the pangs of being away from his homeland. The style of this piece was different from a journalistic article. The memoir was more literary and atmospheric.

While descriptively detailing the night he was attacked in his memoir, Rumi reminisced that he had to leave everything when he had “barely started to live” the way he wanted to as a journalist and public speaker.

He questioned: “Why do I need to even write my story in an era where millions have been made homeless by the turbulences of our times.” Later, he addressed this question by saying that he needed a closure, and writing in his view was a way to move on. Even though he had embraced "an autumn of uncertainty.”

He also read out passages about the young man whom he had hired years ago to work for his as a driver. Rumi’s affectionate portrait of a real life character, his family and how they struggled to make their ends meet was touching. These real stories were located in the larger context of the country and its inequities.

What struck me were the four simple, yet powerful words that Rumi read while narrating his stories: “Being alive is exhilarating.”

Raza Rumi’s second book – a collection of political commentaries – “The Fractious Path: Pakistan’s Democratic Transition’ will be published this summer.