The Work of Andy Watts

Posted by Sam Stahnke at 9:48AM 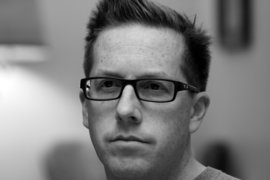 Andy Watts has a prison film; only there’s no prison in it.

The documentary focuses on seven inmates at the maximum-security Auburn Correctional Facility who broke their routine and formed an acting group. All the men are in for murder, and the oldest had been there since 1956.

The inmates generated the acting workshop. “They could learn about themselves through the program,” said Watts, who works as a screenwriter and filmmaker as well as a professor at Ithaca College.  He has won several grants, including one from the Alfred P. Sloan Foundation, for his short film Concrete.

Two of the prisoners maintain their innocence while the other five do not contest the charges. The film is largely restricted to the acting group, which Watts refers to as a sub-habitat within the larger prison habitat.

Watts has participated with several previous FLEFFs. When the theme was Checkpoints. Watts led a mini-course that analyzed places in films that mark significant turning points for characters.  He cites Casablanca in the film of the same name as an example.

At the moment Watts has two scripts in development in addition to his documentary on the prisoner run theater group.

Watts captured the actors/prisoners’ performance of Shakespearian soliloquies.  The soliloquies were melded with re-enactments of the crimes that brought them to prison. Watts adds that the goal was not for the prisoners to let go of their past actions. The point was for them to confront rather than forget.

Working within the prison system engendered certain challenges. The camera was restricted in where it could go.

Because the film devotes less time to the tropes of prison life -- the cells, the guards and the routine -- it focuses on the inmates on a more individual and humanist level.  “I want to get across the humanity of it,” says Watts. “There’s a person in there.”

The film was shot in spring 2012, and Watts had 60 to 70 hours of footage to edit. In the process, he also investigated prison culture in the United States. According to the NAACP, the U.S. has 5 percent of the world’s population and 25 percent of its inmates. Of these, black inmates make up nearly 1 million of the 2.3 million total.

The idea that prison functions as a habitat with both positive and negative connotations is the impetus behind Watts’ 2015 FLEFF mini-course, Locked-Up: Prison as Habitat in Film and Television. In this course Watts analyzes the state of prisons in media through the lens of Habitats.

What comes to mind when you think of prison?