Posted by Molly Bandelli at 12:39PM 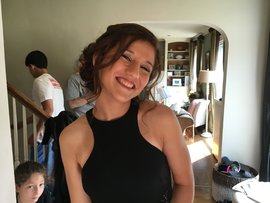 I remember walking into Park 332 for the first time. I sat down in the corner of the classroom and unloaded my books from my bag. The whiteboard in the front of the classroom read, “Welcome to the FLEFF team.”

It was a breath of fresh air to know most of the other bloggers were on the same page as me.

It has been close to a month since I have started blogging for the Finger Lakes Environmental Film Festival. In the last four weeks, I found that my preconception of film festivals barely scraped the surface of what they truly were. I was unaware of all the underlying functions that existed within FLEFF and film festival industry.

Although there is still more to be learned, I’d like to share five things about FLEFF and the film festival industry that I had not known before.

1. FLEFF is an Ithaca College event.

The Finger Lakes Environmental Film Festival is curated through Office of Provost at Ithaca College. The number of attendees and participants makes FLEFF one of the largest events hosted by Ithaca college, falling in second to Commencement.

2. FLEFF is more than a film festival.

The word ‘film’ gives the impression that the festival’s primary purpose is to show films. Although film is included in the title of the event, film only makes up one part of FLEFF.

FLEFF features several other events meant to expand the perspective and facilitate dialogue amongst it’s audience. These include panels, guest speakers, performances, presentations and so much more that makes it more than your typical film festival.

Many have  the preconception that FLEFF is directed towards students and faculty of Roy H. Park School of Communications. I was surprised to learn that this was not the case.

FLEFF extends to all five schools on campus, making it interdisciplinary. Those who are administrators on the FLEFF team come with areas specialties in conducting music, writing, accounting, politics and many more.

FLEFF mini courses are designed to integrate all students no matter their field of study. These courses are taught by Ithaca College professors coming from all academic backgrounds. This year, courses include “Whitewashing the Overdose Epidemic- Disrupting Racial Assumptions”, “Disruptive Narratives and Rhetoric, “Disrupting Genres”, and many more.

4. All film festivals have different objectives.

Festivals like FLEFF operates with the intention of sparking dialogue and debate by showing films that speak to topical issues.

5. Film Festivals are an ongoing process.

Deciding on marketing decisions, finding the right films, organizing contracts for films, scheduling films and events, flying in guests, dealing with last minute changes and making sure everything goes according to plan.

During the week of the Finger Lakes Environmental Film Festival, FLEFF administrators have already begun scouting films and picking the theme for the next year. Planning and executing a film festival is a constant process.