Posted by Gabriella LoBue at 8:01PM 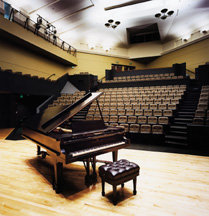 While the film screenings are definitely an important part of FLEFF, one must not overlook the other events that are offered, including musical performances. Fortunately, there are several opportunities to see concerts and silent film compositions at the end of this month. Here are the top three music events of FLEFF 2016 that you won’t want to miss.

1. Landscapes, Celestial and Terrestial Concert with multimedia. Featuring a variety of musicians, singers and a dancer, this signature performance is accompanied by a multimedia show that is sure to be a crowd pleaser. Among the other pieces that are scheduled for the opening concert’s program, there will be a rendition of The Beatles’ “Let It Be.”

2. The Epic of Everest (1924). This silent film is accompanied by live music with the Cloud Chamber Orchestra, as Captain John Noel captures the beauty and historical significance of Mount Everest. Filmed in brutal conditions with a hand-cranked camera, Noel offers a look into the vulnerability, isolation and courage of those who persevere in one of the world’s harshest landscapes.

3. Sadie Thompson (1928). This silent film drama features live music by Fe Nunn and Friends, and spoken word with Cynthia Henderson. After moving to Pago Pago to start anew, a “fallen woman” encounters a zealous missionary who wants to force her back to San Francisco. The subject matter made the film controversial at its initial time of release, however it proved to be a financial and critical success for its silent film star, Gloria Swanson.