What Birds and Film Festivals Have in Common

Posted by Hannah Basciano at 9:33PM 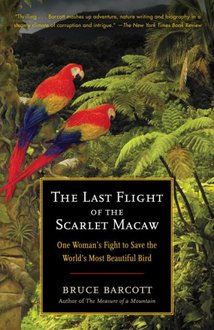 The summit of Caana is breathtaking. It is a place named "Sky Palace" by the ancient Maya people. It's long-lasting ruins stand tall in Caracol, Belize. After climbing 140 feet up massive stone tiers, I finally reached the top of the iconic pyramid and saw miles of deep green steam brushed canopy stretching endlessly towards the horizon. There, in those trees, the last of the scarlet macaws spread their wings to try to survive.

In 2006, the construction of Belize's Chalillo Dam flooded acres of precious rainforest once home to a specific subspecies of native macaw. The beautiful birds had lived for countless generations amidst branches now under the waters of the great Macal River. The dam's construction had been a hot topic amongst the Belizean elites, but after years of dispute the capitalists seeking economic gain beat the conservationists. The dam was built.

I first learned about the Chalillo controversy through the words of award-winning journalist and activist Bruce Barcott in his book The Last Flight of the Scarlet Macaw: One Woman's Fight to Save the World's Most Beautiful Bird. Published by Random house in 2008, the book follows the efforts of Sharon Matola, "the zoo lady," to stop the corrupt Belizean government from destroying the precious ecosystem of the Macal River Valley.

'"The first time we came here I didn't know what to expect,' she [Matola] told me as we paddled upstream. 'What we found just blew me away. Jaguars, pumas, river otters, howler monkeys. The place was like a Noah's Ark for all of the endangered species driven out of the rest of Central America. There was so much life! That expedition was when I first saw the macaws."'

Last January, I climbed the ruins to see the land for myself. It was a moment I had been anticipating for months since I had decided to attend the Ithaca College Environmental Science Program's annual trip to Belize. I was beyond excited to see the ecosystem I had been reading about in Barcott's book.

Seeing this vast forest, lush with growth, yet knowing how endangered every tree my eye focused on, every animal I couldn't make out that called that tree home, is—it was gut-wrenching.

I learned a lot about the Belizean rainforest from Barcott's words. I witnessed the affects he predicted would occur from the dam's construction. I kayaked on the very waters that held the macaw's once precious tree habitats submerged.

As Barcott explains, Belize is an example of a post-colonial country putting economic development ahead of environmental conservation. Yet, by doing this, the country lost some of its pride, history, diversity, nature, and, of course, some of its precious birds.

FLEFF addresses problems like Belize's every year. This year's theme, specifically, comments on the necessity of habitats.

The Chalillo Dam destroyed the habitat of the last scarlet macaws. In doing so, Belize created a habitat of human gain at the expense of natural disorder.

FLEFF'S theme this year will explore biological habitats, like that of which the scarlet macaws once relied, as well as constructed habitats of human emotion, action, perception, etc. At the same time, the festival will create a habitat of its own. A habitat of curiosity. A habitat for art. A habitat for questions.

I can honestly say that both are absolutely fantastic places to be.

Have you ever been impacted by a really good book?