Posted by Patricia Zimmermann at 2:15PM 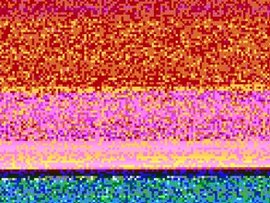 We could not be more excited here at FLEFF.

Evan will be joining us at FLEFF 2013 as a featured guest, showing his new works and discussing the mobilities of new media arts.

Here's what Distriburted Microtopias curator Dale Hudson, in Abu Dhabi, had to say about Null Sets:

"Exploring the gaps between data and information, Null_Sets renders large-scale data translation into images that visualize size and architecture when users enter data and click on the “jpegify” button.  Null_Sets engages the utopic notions of digitized data across distributed networks like Project Gutenberg and Google’s libraries by allowing users to enter titles of books that are routed through a Flickr photostream.  If these libraries function like mirco-utopias across distributed networks, then Null_Sets asks us what it means when all information is no longer rendered, so that difference becomes negligible, nonmeasurable, and ideal."

About Amy and Evan:

Amy Szczepanski is a Research Assistant Professor of Electrical Engineering and Computer Science at the University of Tennessee and serves as coordinator of education, outreach, and training for UT's Remote Data Analysis and Visualization Center (RDAV). Her research interests expanded to include broader engagement in mathematics, including the study of mathematics in the fiber arts. Since 2010 her interests have expanded to computer science.

Evan Meaney researches and teaches transmedia design at the University of Tennessee.  His practices explore liminalities and glitches of all kinds, equating failing data to ghosts, seances, and archival hauntology.  He has been an Iowa Arts Fellow, an artist in residence at the Experimental Television Center, and a founding member of GLI.TC/H. Currently, he works with the super computing team at Oak Ridge National Laboratory on new projects made possible through generous funding from the National Science Foundation.

What is your response to Null Sets?  What does it get you thinking about?