Posted by Thomas Shevory at 5:46AM 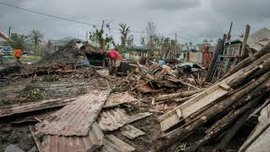 Wednesday I attended a side event on impacts of climate change in the Pacific region, with special attention to the small island states.  A string of slides on the projection screen showed very tangible, and often catastrophic, effects experienced by people and ecosystems in the region.   One speaker noted that carbon contributions of Pacific Island states are negligible, somewhere on the order of .06 % of the global total.

The panel highlighted a partnership that small island states had been developing with the governments of Finland and Japan to provide better warning systems for  extreme weather events.  But the long-term prospects are dire. Sea level rise due to expansion has accompanied a 1 degree Celsisus water temperature increase in the Pacific. Pacific islanders have no choice but to make long term plans for settlement in other places, as it is clear that, within a few decades, their territories will be uninhabitable.

The presentation was sobering, if not downright heartbreaking, but the tone was less anger than resignation and practical determination. “This is what we face, and here’s what we are going to have to do.”  As I watched, I couldn’t help but think of the ongoing so-called debate in the U.S. over climate change. It amounts to a willful denial of evidence, coupled with ridiculous stunts (such as James Inhofe’s throwing a snowball on the Senate floor) or meaningless assertions (such as governor and presidential candidate Chris Christie’s recent statement of his "feeling" that climate change is  “not a crisis.”)

In many parts of the world, people don’t have the luxury of denial or political grandstanding, since they are engaged in the endeavor of how to plan for lives in a climate changed world.

The disastrous consequences of climate change for Pacific Islanders, Bengalis, and others on the frontlines of climate change, cannot be considered apart from the question of responsibility.  And that gets to one of the most heated disputes of COP21.

The concept of “loss and damage” has been under consideration since Warsaw’s COP19. While the parties promoting it are careful not to reduce it to questions of liability, ultimately, it cannot be separated from them. After all, it’s a bedrock principle in American law, and other legal systems, that those injured by one party are entitled to compensation by the injuring party. Somehow that widely accepted legal principle has broken down it the context of climate change.

John Kerry has suggested that the language of loss and damage is a deal-breaker in the Paris talks. Congress, he says, would never accept an agreement that potentially put the U.S. government or corporate interests on the hook for what could amount to billions, if not trillions, of dollars over the long term.  But, given the unlikelihood of the present congress endorsing any climate change agreement, that seems like a weak argument.

The parties favoring loss and damage language have been just as adamant that it should be included in the final draft.  As a result, Kerry has reportedly offered millions of dollars earmarked for adaptation measures to forego it.  Other reports suggest that the U.S. will accept the loss and damage language as along as it is explicitly disassociated from the concept of legal liability.

We will find out later today if Kerry’s efforts have been successful.  But it’s important to keep in mind that was that what the U.S. is engaged in is an attempt to extinguish the most rudimentary form of due process before it even has a chance to get started.