Posted by Thomas Shevory at 10:06AM 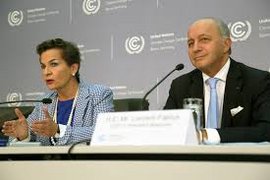 The final draft agreement was supposed to be released today at 1 PM, Paris time, but it was delayed until 3.  I have to admit that it was fairly exciting to be allowed into the plenary for the formal release (before the press was allowed in.)  At one press conference I attended, one participant said to look for three things in the agreement:

First, does set a target of zerio carbon emissions by 2050?  Second, does it recognize legal status and rights of indigenous people (giving them a seat at the table)?  Three, does it follow the Warsaw Agreement on loss and damage, which would allow historically non-emitting parties to sue historical emitters for liability from damages caused by climate change?  (More about this in a future blog.) The answer to the first two questions appears to be "no."  The answer to the third seems to be "yes."

I'm sure there will be tons of analysis over the next few days.