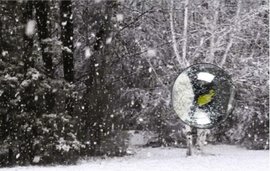 Part of Passa’s Live Architectures series, Drone Snow-globe presents us with a drone trapped inside a snow-globe, inviting us to think about pastoral winter landscapes that fall under remote sensing and are inserted into the realm of mass surveillance through the interface through drones.

As users attempt to unsettle the drone by “shaking” the globe, they experience the frustration of not being able to move the drone except on its axis, which is suggestive of our relative powerlessness to do anything about drones and satellites used in surveillance and assassinations.

The snow-globe itself remains trapped inside a world where snow falls upward, asking us to think about the orientation of our assumptions.

Like other projects in her Live Architectures series, Drone Snow-globe reimagines and speculates on the digital as vibrant matter. The artificial not only appears living, but is living.

Chiara Passa is an artist and scholar whose projects include animations, interactive video-installations, site-specific digital art in public space, video-mappings, and video-sculptures. She interrogates and experiments with new technologies to locate unknown creative possibilities, often asking her audiences to confront their own assumptions in response to liquid spaces, liminal areas, and internet interfaces that confront boundaries between the inner and outer worlds. She ran an eight-year blog-artwork called ideasonair.net, which posted a monthly idea for art, and runs The Widget Art Gallery, a web-based app whose gallery room hosts monthly a solo digital art exhibitions. Other projects from Passa’s Live Architectures were included in FLEFF’s Iterations as Habitats (2015).