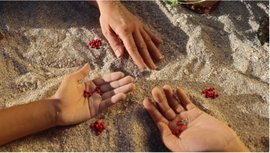 Rachel Johnson is a North American artist working regionally along the East Coast. Her media-specific videos and performances unveil the temporal nature of the human within the frameworks of biological desire that guide the evolution of our virtual/material landscapes and poetics. She traces her own origins to the humid subtropics of North Carolina and has no reaction to poison ivy, pollen, or mosquito bites.

With the movement of human life comes the movement of other life forms, including insects, amphibians, fish, reptiles, and mammals. Hundreds of exotic life forms have been  brought to South Florida, but only a few possess adaptive traits that allow them to escape captivity and multiply to the extent that they can dominate ecosystems and threaten indigenous species. Those species invasive in one tropical climate are usually successful in others. Rosary Peas’ prolific scarlet seeds at once allow it to reproduce excessively and inspire global human fascinations that further seeds’ reach.

The Escaped Exotics project’s first short film opens with a nighttime shot of the breeze, ruffling native palmetto leaves, over which running text announces in all caps: “ETHNOBOTANICAL ILLUSTRATIONS FOR COMMON INVASIVE PLANT SPECIES OF FLORIDA.” The sound of wind hitting the microphone evokes a B-grade horror film, but shifts suddenly to the music of a Rajasthani folk song in which the bride climbs a jequirity plant.

A composite shot of the planet earth seen from space and a pod of jequirity seeds evoke a nature documentary. Rather than exposition through voiceover or intertitles, the film shows multiple hands, collecting poisonous jequirity seeds. They appear to measure and weigh them. At times, the choreographed scenes seem like a children’s game; at other times, they seem like tokens of trade. Jequirity seeds join shelled cashews and coffee beans. Ambient sounds and music (via composer Josh Plotkin) enter as the seeds are cast into the ocean and to arrive in new lands. In a dreamlike sequence, a young woman collects seeds washed ashore and holds them as a form of protection from dark forces surrounding her. The film ends with recordings of a prescribed burn incited to restore native ecosystems appropriated from a Florida Parks wildfire technician’s cell phone. Testimonies in Spanish (excerpts from a poem by Spanish Mystic San Juan De La Cruz) and English (live commentaries from the wildfire technicians) follow to frame relationships with the urbanized South Florida environment invaded by jequirity.

Indigenous to India, the jequirity or rosary pea (Abrus precatorius) is recognizable by its red seeds dotted with a black “eye.” Highly toxic, a single seed can kill an adult human. Because they have hard shells and are brightly colored, jequirity seeds have been used in protective jewelry and charms as a ward against evil, in spiritual adornments (including rosaries), in games, as ancient forms of currency and for weapons. Seeds are typically spread by birds, but humans have also helped them travel from South Asia to the Caribbean and beyond. The invasive vines grow and threaten to suffocate other forms of plant life. Slash-and-burn practices to clear land makes conditions ideal for the jequirity to grow.

A downloadable poster offers insights into the film’s evocative scenes, including information on the chemical properties of jequirity seeds and rules for games played with them. Posters on Rosay Pea and three other invasive plants are currently being translated into Haitian Creole and Spanish and distributed through the Miami bioregion via an urban wheatpaste campaign.