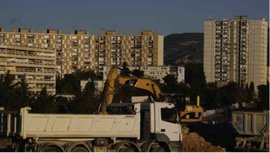 Ramona Bădescu is a French-Romanian artist, author of children’s literature, theater actress, and poet. Là où la terre is her first film project. Born in Romania, Badescu immigrated to France at the age of 10. She has published more than 25 books since 2002, garnering numerous accolades and translations, notably her Pomelo the Garden Elephant series. They often employ ambiguity and contradiction between illustrations and text to inspire creative reflection and debate for both children and adult readers.

Jeff Silva is an artist, filmmaker, teacher, and programmer from the Harvard Sensory Ethnography Lab. Silva’s work explores quotidian and geographic aspects of his subjects’ lives, often over long spans of time, focusing on displacement and fragility, documenting populations, individuals, systems and ecologies at risk. It has been exhibited at festivals and museums internationally. He organizes La Fabrique des écritures, a teaching and production lab at the crossroads of artistic practice and social science, in Marseille.

The sounds of birds merge with those of machines in the opening to Ramona Badescu and Jeff Silva’s Là où la terre/From the Land. These sounds occur over the visual image of a piece of land, ambiguously a hill in a craggy countryside or perhaps a mound in a remote landfill. They are the city of Marseille.

The documentary combines aspects of experimental filmmaking combining its attention to formal elements of composition with aspects of ethnography using stories recounted by subjects.

Two voices recount finding wild thyme, pears, and lavender as the camera gazes upward to a barren landscape. Other voices join in a chorus of stories of the past against images of the modern city with its Carrefour hypermarkets and city buses.

The voices are never attached to particular subjects. Instead, they repeat words—“black, black, black soil,” “green, green, green, black earth,” “by walking, walking, walking, it ended up making a little trail”—as though engaging in dialogues. At times, the repetition seems like an effort to stop the flow of images taken in the present by the filmmakers from flooding their memories of the past.

The voices reveal themselves. Some speak of the arrival of immigrant workers, recruited from North Africa, then the sudden rise in HLM (Habitations à loyer modéré), prefab public-housing projects, to replace the bidonvilles (shanty towns) along the stream in the city’s northern district. Others speak of modern parking lots where forests no longer exist.

The film thus weaves subjective accounts of space, produced at the intersections of social, historical, architectural, and human forces, where “nature seems caught in a grip,” as the filmmakers explain in an artist statement, “breathing only in the hollow of a memory of those who lived through it as children” during the 1960s and 1970s.

The green trees and weeds, the clean water, the abundance of flowers, fruits and herbs—all exist only in memory. The documentary disrupts any potential nostalgia of nature as bucolic and culture as progressive in a city that once served as a conduit between France and its empire.