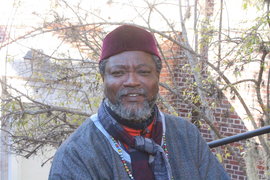 Kole Odutola is a poet, photojournalist, and environmental activist who began his studies as a botanist, moving on to earn degrees in media studies and communication from universities in Nigeria, the United Kingdom, and the United States. He has published two poetry collections and has performed as a poet and griot in the US, the UK, Nigeria, and South Africa. Currently, he lives in Gainesville, where he teaches Yoruba language and culture at the University of Florida.

As a product of the written word, poetry may not be too difficult to define.  In my engagement with sense and sound, I try to balance the sounds of the words with an internal narrative cohesion that shares space with my continually hybridized cultural identity, which has roots in the many continents where I have lived.

My language of wider communication is English. But the resulting tonalities in the free verses I write resonate with expressions that share very little with Western poetic traditions, conventions, and sensibilities.

My position is not far from literary scholar Munashe Furusa’s observation that “African literature provides a dynamic forum to debate critical issues relating to the Euro-African encounter and African people’s response to it.”[1]

As Nigerian writer Kole Omotoso observed, practitioners like the late Christopher Okigbo believed that the poet is “no ordinary mortal but a divinely inspired artist, a possessed performer through whom hidden truths of the spirit are revealed and through whose influence mankind undergoes regeneration and spiritual rebirth.”[2]

Still, there are scholars like Friday Okon who focus on poetry’s political potential. In a 2013 article, he concludes that “[m]odern African poetry is poetry of commitment, and therefore, it has utilitarian value. It began as an intellectual response to the denigration of Africa and Africans by the white colonizers.”[3]

For most poets, the ruling elites are nothing but ruining elites. They have continued the colonialists’ agenda of oppression, suppression, and mis-education.  Although poets have tried, words in cold print have not changed the hearts of tyrants. And poorly written poetry has never inspired people who must work day and night to keep body and soul intact.

When some of Nigeria’s intellectuals voted with their feet by leaving, the new world economic disorder made the streets home of the intestines of those who remained. Poets had to combine systematic intellectual engagement with street activism. The struggle to spread sanity across Africa became tougher.

Before long, intellectuals started to leave the continent in large numbers. For their disciples, living assumed new meaning. The message we heard was “scram before you become another scrap on the garbage heap of history,” but some of my contemporaries remained behind and devised ways to engage the soul for the benefit of self and society.

Is it not true that the cycle of life never ceases?  As a fire dies, ashes arise to cover it.  But this essay is not about my generation and its efforts to tame the monster that Nigeria has become.  It is about writers who relocated when the system became dislocated. Although many African writers have grown old, some are still looking for meaning in a nation that kills dreams and dreamers.

I vividly recall sitting next to Ken Saro-Wiwa, the environmental activist executed by the Nigerian military junta in what human rights groups called judicial murder.  I can still hear his roaring laughter and see the ever-present pipe between his lips. Saro-Wiwa is not the only artist who has bid the world good bye. Our Chinua Achebe joined these writer saints a few years ago as well.  Their memories will never burn away.

Environmental politics, gender justice, and myriad identity formations top my list as the most important concerns of our time. These themes arise constantly in works of African and African Diaspora writers.  According to Furusa, “[t]wo processes that seem to engage the African writers’ artistic imagination the most are the (dis-)memberment of African people through slavery, colonization and neo-colonization and their (re-) membering.”[4]

Niyi Osundare, a Nigerian poet based in New Orleans, serves as an arrowhead focusing on nature and the environment. Two of his collections The Eye of the Earth and Hole in the Earth, bring home the apocalyptic degradation of the earth in a way readers within his cultural space can relate to. Foreigners to Osundare’s cultural tropes have never been left out. The urgency in Osundare’s words cannot be missed. However, a robust debate about the effectiveness of environmental themes in poems written by Africans is virtually absent.

Should African Poets bother to write beautiful lines about environmental issues? This question counters the observation made 15 years ago by William Slymaker (2001), who argued that "there is no rush by African literary and culture critics to adopt ecocriticism of the literature of the environment as they are promulgated from many of the world's metropolitan centers."[5]

Has it not also become a central theme for nearly a decade that African writers have questioned the utility of an apolitical African literature, both in general and as it relates to the environment? It is possible to point to a number of scholars who have strongly made this point in conference halls and in the academy.

The politics in poetry is hardly partisan; poets balance between what is and what ought to be. The resolution of social conflicts and crises motivates most poets, whether African, Diasporan, or other to constantly speak on behalf of nature and other creations.

Poetry paints pictures with words. These words produce sense making which can propel readers to make policies to change our world; they are a new kind of fire that arises out of the ashes of injustice. My large robes of words can never cover me in times of conflict. But with them,  I can recover from these political fires by excavating arguments to mobilize change.

and blessed my off-spring with flames of blame,

Would you not expect me to dip my pen with passion as I pass on my ideas?

We have heard the lie that the child of a lame father cannot chase after game.

That lie met naked truth and a sentence became (a) ruse.

[1] Munashe Furusa, “African Writers and the Art of Remembering: Dismembered African Communities,” in The Borders in All of Us: New Approaches to Global Diasporic Societies, ed. William A. Little (Northridge, CA: New World African Press, 2006), 270.