THE KNIGHTS will perform a free concert on Monday, November 6 at 8:15pm in Ford Hall in the James J. Whalen Center for Music, Ithaca College. There will be an open rehearsal and Q&A at 5pm. This concert is presented by the Shirley and Chas Hockett Chamber Music Series.

Dynamic and innovative, The Knights are a collective of musicians dedicated to transforming the concert experience and eliminating barriers between audiences and music by playing old music as if it was written yesterday and inhabiting new music in a way that’s familiar and natural. Rooted in their shared classical tradition, the group embraces diverse musical languages with a passion for musical discovery. In this concert, we will experience traditional European styles, Mediterranean and Middle-Eastern idioms, as well as improvisational and newly-composed works.

The program includes traditional standards arranged by and for the group and special guests, including Johann Sebastian Bach’s Concerto No. 1 in D Minor and Franz Schubert’s The Shepherd on the Rock. Their Suite Upon One Note combines the music Henry Purcell, Giovanni Sollima, and work by Kinan Azmeh, Avi Avital, and the Knights. Additional repertoire is contemporary but informed by various traditions, including Lullaby and Doina by Osvaldo Golijov, Concertino Grosso (world premiere) and November 22nd by Kinan Azmeh, and Ascending Bird by Colin Jacobson and Siamak Aghaei.

The Knights are led by Artistic Directors Colin and Eric Jacobson and will be joined by special guests Avi Avital, mandolin, and Kinan Azmeh, clarinet.

This concert is FREE and open to the public.

Individuals with disabilities requiring accommodations should contact the Office of Concerts and Facilities, School of Music, at 607-274-3717 or ekibelsbeck@ithaca.edu/akemp1@ithaca.edu. We ask that requests for accommodations be made as soon as possible. 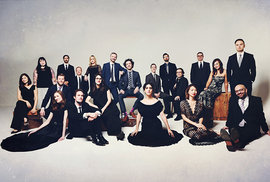