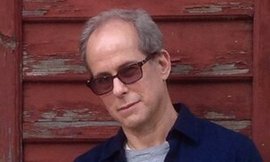 Steven Ginsberg is a screenwriter who serves as Pendleton Chair of the Ithaca College L.A. Program where he teaches film and TV writing and advises students about the entertainment industry.  He also writes the weekly blog notesfromachair.com, which focuses on pop culture, social issues and navigating the writing life.  He recently completed the screenplay for Stereotype Media’s upcoming film Mansfield, the true story of a local newspaper editor who tries to uncover 20 years of mass corruption in the small Ohio town where he lives in the 1970s.

What is a film?

I’ve been asking myself that question a lot lately as someone who is a screenwriter and a teacher of screenwriting –  and a lifelong moviegoer.

Here is what the dictionary says:

1. a thin flexible strip of plastic or other material coated with light-sensitive emulsion for exposure in a camera, used to produce photographs or motion pictures.

So, what exactly is a movie?

Can we avoid tedious definitions? Perhaps not. The best that I can come up with is a that a movie is a filmed story, generally 2-3 hours long, usually shown at a theatre that charges admission.

Of course, like my mind, this is woefully outdated.

As evidence, I present my filmed story diary of the six-week period from Thanksgiving to New Year’s Eve of 2016.

I also saw Moonlight and Toni Erdman and many others.  But if you’re thinking less of me for not mentioning them – the real films – know this: I never have been a movie snob.

And if you are – you are also hopelessly out of date.

You have to be very careful when you say you’re going to see a movie these days because that term means different things depending on the circumstances.

Of course, you can continue to think of films the way you always have, but when you resist change you should understand what you are fighting against.

First, the majority of new movies you see are not actually films at all but stories transmitted as extended files of digital information.

Second, many movies– stories we used to watch with “all of those (other) wonderful people out there in the dark”1 will not even be viewed in theatres.

Film studios like Universal and Warner Bros. are now in active talks with exhibitors to make first-run movies available for at-home streaming in as little as two weeks after their release at your local multiplex. Known as windowing, it will cost us from $25-$50 per showing and will require the push of a button.  No parking fees, no baby sitter, no concession charges, no paying for seats in advance or on the spot, and no moving your behind off your couch.

Is it a good thing?  That is not the point. It is the inevitable thing and in the end will cost us a lot less than the traditional alternative – well, at least in terms of money.

If this seems like sacrilege to you, it is important to remember some facts.  Like many voters in our current political landscape, movie aficionados tend to look at the past with a gauzy nostalgia that has little to do with what actually happened.

To wit, certain classics we now view as master filmmaking achievements were first exhibited on television.  Ingmar Berman’s Scenes from a Marriage (1973) was a six-part TV miniseries before it was condensed into its theatrical version. His Oscar-winning film Fanny and Alexander (1983), was originally shot as a 312-minute TV drama in four parts but was first seen commercially as a 188-minute theatrical release.

Other classic festival marathon film-going experiences like Fassbinder’s Berlin Alexanderplatz (1980) (15.5 hours) and Keislowski’s The Dekalogue (1989) (10 hours) – were viewed as multi-part small screen dramas in their native countries before they showed in the US as films.

We are also enjoying a second golden age of American television as seen through a filmic lens.  Few theatrical motion pictures of the last few years can match the storytelling, acting or technical achievements of AMC’s Breaking Bad’s seven seasons (2008-2013) or Mad Men (2007-2015), the seminal show that put the new network on the map in the eyes of the filmmaking community and the public.

This change is not unprecedented. Today’s films are following the technological journey of music.  Grab the nearest baby boomer if you need perspective.  First there was vinyl, then reel to reel (if you were too broke to buy the album but your friend had it). Then there were 8-tracks which gave birth to cassette tapes, which were supplanted by CDs, which are now considered grandpa-tech next to digital downloads.

CDs are the audio equivalent of DVDs, laserdiscs, and before that video tapes, which were commercially made or pirated when the film was shown on TV.

This was long before there was a multiplex in sight, though how long they will survive is anyone’s guess.