Chairman and CEO of AAR Corp. to Speak at Ithaca College School of Business

ITHACA, NY — David Storch, chairman of the board and chief executive officer of AAR Corp., will deliver the Ithaca College School of Business Distinguished Alumni Lecture — “Leading Through the Economic Cycles” — on Monday, Nov. 8. Sponsored by Tompkins Trust Company, the talk will take place at 6 p.m. in Room 111 of the Dorothy D. and Roy H. Park Center for Business and Sustainable Enterprise. It is free and open to the public.

A 1975 graduate of Ithaca College, Storch has been with AAR since 1979. He was named the company’s chief operating officer in 1989 and chief executive officer in 1996, before assuming his current role in 2005 as chairman and chief executive officer. He is credited with successfully leading the company through several economic cycles, including the difficulties of the post-9/11 economy.

AAR is a leading provider of a diverse range of products and services to the worldwide aerospace/aviation industry and has been lauded for its outstanding management practices. In 2010 the company was named by “Forbes” magazine as one of the “100 most trustworthy companies,” a listing of American businesses that have the most transparent and conservative accounting practices and most prudent management. AAR prides itself on a close-to-the-customer business model and a dedication to maintaining the highest levels of quality, safety and service. The company has been serving aviation customers since 1951 and today has revenues of $1.4 billion with 6,000 employees in 13 countries.

Storch has served on the Ithaca College Board of Trustees and is a current member of the President’s Roundtable, a group of leading advisors to President Tom Rochon. In 1986 he established the David P. Storch Endowed Scholarship Fund, which annually awards scholarships to worthy students in the School of Business. In recognition of his generous support of the business school building project, the David P. Storch Moot Boardroom has been named in his honor and will be dedicated during his appearance on campus.

For more information contact Maria Fiorille, assistant to the dean of the School of Business, at 607-274-3341 or mfiorille@ithaca.edu. 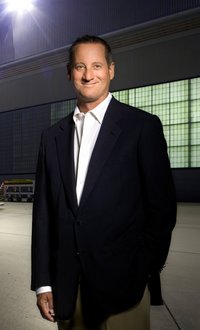