ITHACA, NY — An Ithaca College faculty member and an alumnus whose work is carried out behind the scenes, as well as a graduate whose work is seen very much on screen — in the hit series “Mad Men” — have been recognized with 2012 Primetime Emmy Award nominations.

Feldman joined the cast of “Mad Men” this past April as the newest employee of the advertising firm Sterling Cooper Draper Pryce. He plays the talented and ambitious junior copywriter Michael Ginsberg, whose immediate success in pitching ideas to clients makes him a rival to his boss, creative director Don Draper. Feldman’s nomination is one of 17 scored by “Mad Men” this year, the most of any show.

Feldman made his Broadway debut opposite Kathleen Turner and Alicia Silverstone in “The Graduate,” a role he auditioned for even before graduating himself with a bachelor of fine arts degree in acting. His film credits include “Cloverfield” and “Friday the 13th.” On television, he portrayed Fran Drescher’s son on the series “Living with Fran” and from 2009 to 2011 he was a regular on the Lifetime series “Drop Dead Diva” in the role of the guardian angel Fred.

Grzaslewicz, an assistant professor who teaches courses in documentary studies and production, served as a dialogue editor for the three-part Ken Burns film “Prohibition,” which aired on PBS. She was part of a team that was nominated for their work on the episode titled “A Nation of Hypocrites.”

This is Grzaslewicz’s fourth primetime Emmy Award nomination in the same category. She won in 2008 for her sound editing work on the Ken Burns miniseries “The War.” A graduate of the Lodz Film School of Poland, she has worked on a number of documentaries as well as on feature films for Woody Allen and Brian DePalma, among other directors.

Mediuch racked up his 11th primetime Emmy Award nomination as part of the team of editors that puts together the CBS series “Survivor.” He has been nominated every year in this category — sometimes for more than one episode — since 2004. He has also done picture editing for the Style Network series “Jerseylicious” and worked on CBS’s “Big Brother.”

The winners will be announced at the 64th Primetime Emmy Awards telecast on ABC on Sunday, Sept. 23. 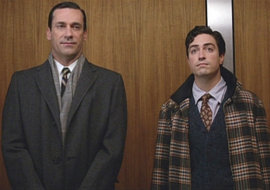