Ithaca Named One of 'Best 376 Colleges' by Princeton Review

ITHACA, NY — Ithaca College has once again been named as one of the country’s top institutions for undergraduate education by the Princeton Review, which just released the 2012 edition of “The Best 376 Colleges.” The annual guide also ranks Ithaca as #3 for best college radio and #18 for best college theater, and its regional breakdown lists Ithaca among the colleges considered “Best in the Northeast.”

Only about 15% of America’s 2,500 four-year colleges are profiled in the book, which includes detailed descriptions of the institutions as well as ranking lists of the top 20 schools in 62 categories based on the Princeton Review’s surveys of students attending the colleges.

“We commend Ithaca College for its outstanding academics, which is the primary criteria for our selection of schools for the book,” said Robert Franek, Princeton Review’s senior vice president of publishing. “Our choices are based on institutional data we collect about schools, our visits to schools over the years, feedback we gather from students attending the schools and the opinions of our staff and our 28-member National College Counselor Advisory Board.”

In its description of IC, the Princeton Review notes that “Ithaca’s admissions profile continues to be on the rise with a good deal of highly competitive applicants.” Students surveyed for the guide had high praise for the faculty, noting that professors are “really engaging and understand how to present the material so that it is relevant and meaningful” and “passionate about their fields and have a genuine interest in getting students excited about their passions.”

Named #3 for college radio, Ithaca has two student-operated stations — 92 WICB and VIC Radio — based in the Roy H. Park School of Communications. Ranked #18 for college theater, Ithaca offers five academic majors in the Department of Theatre Arts, with a half dozen main-stage productions presented each year by Ithaca College Theatre.

The Princeton Review also compiles a listing of the best colleges in four regions — Northeast, West, Southeast and Midwest — in order to raise awareness of academically excellent institutions for students looking to study within a specific geographic area. Ithaca was one of 220 colleges to be included in the Northeast region ranking. 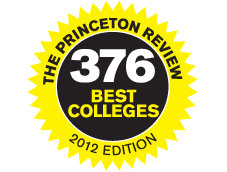