9/7/2017 Update: Professor Rodgers and a team of students returned to Ireland in summer 2017 to finish scanning Trim Castle and scan other historic sites in the area.

Imagine touring a medieval castle without ever leaving your room. That may soon be possible thanks to the efforts of Professor Michael “Bodhi” Rogers and a team of students from Ithaca College.

Rogers and four students traveled to County Meath, Ireland, in June to use a laser scanner to map Trim Castle. Built during the 12th century, it is the largest Anglo-Norman castle in Ireland and was used to film scenes in the film “Braveheart.” Over the course of a month, they mapped part of the outer wall that encircles the castle, as well as the outside of the castle itself. 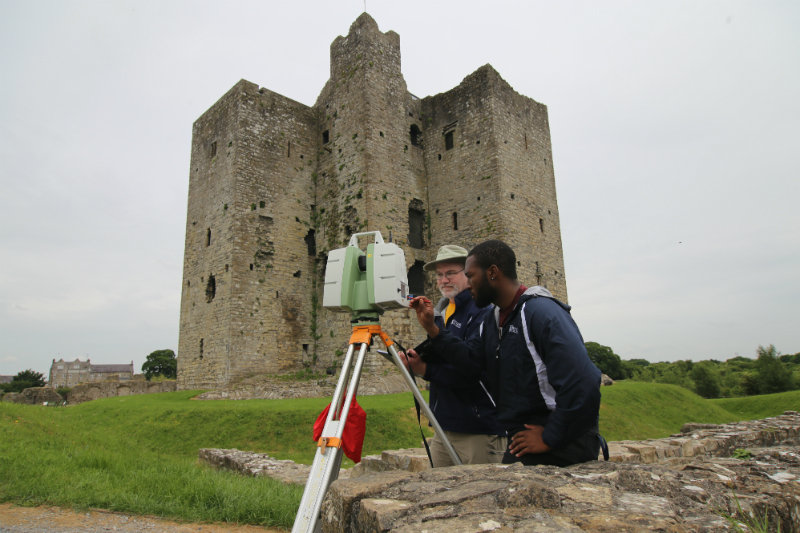 
The research team expects that it will take multiple trips over the course of at least two years to complete scanning the outside the castle, and Rogers hopes to get permission to scan the interior during a return trip to the site.

The laser scanner used by Rogers and his team pulses 50,000 times per second to take a reading every five millimeters, while simultaneously taking digital photos. Computer software is then used to create a 3D model of the structure.

That model has a variety of uses, from virtual tours to preservation planning. Pieces of the model can also be tagged with information that could prove useful for future repairs to the site.

“Say we scan the inside of a cottage,” explains Thomas Steele, a senior physics student on the team. “You can tag an antique doorknob and list the maker and the material it’s made out of, so if something was to happen, you can click on the scan and have all of the information to accurately reproduce the doorknob.”

Steele has assisted Rogers in scanning buildings at Ithaca College to make a 3D model of the South Hill campus. He says that while the process is very much automated, it can be challenging to find locations from which the scanner can see all of the points it needs to map.

“There are angles to the structure of any building that make it nearly impossible to scan all of the building,” adds Harrison Kesel, another student on Rogers’ team. “You have to really envision what the scanner is going to be doing to be able to get the best scan possible.”


A professor of physics and astronomy, Rogers specializes in geophysical archaeology and historic preservation. He has completed scans of several landmarks in the United States, including Abraham Lincoln’s cottage in Washington D.C., Ulysses S. Grant’s cottage near Saratoga Springs, N.Y., and the Old Fort Johnson National Historic Landmark in Johnstown, N.Y.

“Our research at Trim Castle will be the largest historic structure we’ve laser scanned, which will provide us with interesting new challenges,” said Rogers.

The project is part of a partnership with the Irish Archaeology Field School and the State University of New York at Cortland. While Ithaca College students scanned Trim Castle, students and staff from IAFS, SUNY Cortland and other universities conducted archaeological excavations at the nearby Black Friary, the site of a 13th-century Dominican seminary. Rogers presented his work to the Trim community and the Irish Conference of Medievalists on June 30.