Thanks to a generous endowment from the estate of Jeremy J. Stone supporting the Park Center for Independent Media, students in Ithaca College’s Roy H. Park School of Communications will have even greater access to innovative communications resources, internships, lectures and workshops.

The Jeremy J. Stone Endowment in Support of the Park Center for Independent Media (PCIM) was established to expand the outreach and programming of PCIM and to engage more faculty and students in its work. The center was launched in 2008 with a gift from the Park Foundation to study journalism-oriented media outlets that create and distribute content outside traditional corporate systems and news organizations. PCIM engages media producers and students in dialogue and action about independent media, especially U.S.-based outlets producing content on issues such as equity, social justice and sustainability. Additionally, PCIM provides grants to students who work as summer interns at specific independent media organizations or nonprofits. 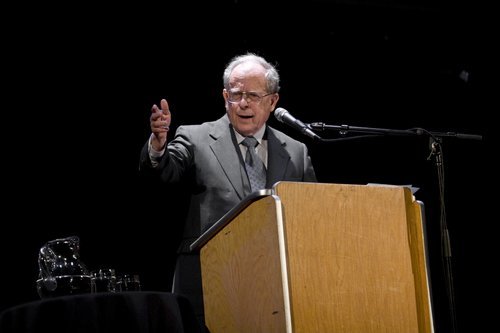 
Stone, who passed away on January 1, 2017, began his career as a mathematician before becoming an arms control researcher and advocate. He served as president of the Federation of American Scientists for 30 years, leading the organization’s contributions to policy debates on subjects ranging from the nuclear arms race and human rights to civil conflict and energy conservation.

Stone was a longtime Ithaca College friend and supporter whose name is well known to the IC community. The Izzy Award is named after Jeremy’s father, maverick journalist I. F. “Izzy” Stone, who launched I. F. Stone’s Weekly in 1953 to expose government deception, McCarthyism and racial bigotry. Presented by PCIM annually for “outstanding achievement in independent media,” the Izzy Award goes to independent outlets or journalists for contributions to our culture, politics or journalism created outside traditional corporate structures.

“Jeremy Stone was a big supporter of our center’s efforts to help socially-conscious students move toward careers in independent media and journalism,” says Jeff Cohen, founding director of PCIM. “He loved that our Izzy Award has raised awareness of his dad’s work and legacy.”

While the Izzy Award recognizes those who have made an impact on independent media and journalism, it is the students whose burgeoning media careers are truly the focus of the center. In the last decade, PCIM has supported 120 internships at independent media outlets or progressive nonprofits. Interns have gone on to paid jobs at such organizations as AlterNet, CommonDreams.org, WRFI Community Radio and Freedom to Marry.

For Zach Tomanelli ’11, it was PCIM that spurred his interest in non-traditional media. “As a student, I was encouraged to explore alternative and independent media outlets,” Tomanelli recalls. “These outlets are producing in different and innovative ways. These places are growing, and therefore, they are the places you can often find your first job.”

While an undergraduate, the center helped Tomanelli land internships at alternative media organizations Fairness & Accuracy in Reporting (FAIR) and “Democracy Now!.” Currently, Tomanelli serves as the online coordinator for the Vermont Public Interest Research Group, the state’s largest nonprofit environmental and consumer protection organization. Tomanelli directly attributes his job path to PCIM, noting that the IC journalism faculty understand that the “media environment is changing” and there is more than simply the corporate path.

It is this commitment to change and innovation that drove I.F. Stone to publish his first muckraking newsletter more than 60 years ago, and that currently drives PCIM faculty and students to dedicate themselves to telling vital stories ignored or downplayed in mainstream news media that explore challenging issues of social justice and sustainability.

Izzy’s prescient observation on the media’s role in our culture continues to reverberate amidst the current political and media climate.

“In a year when some media outlets focused more on presidential tweets and antics than on life-or-death policy issues, independent outlets have given an intense focus to issues of political corruption, racism, immigration, environmental impacts and human rights abuses,” says Cohen. “Independent journalists and institutions are more important than ever.” 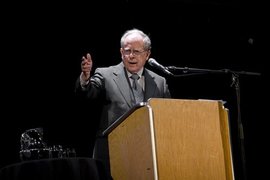