Before an arena packed with thousands of students, faculty, staff, alumni and distinguished guests from across the country, Shirley M. Collado was inaugurated as the ninth president in Ithaca College’s 125-year history on Saturday, Nov. 4.

Collado is the second woman to hold the office, and the first person of color. She is also the first Dominican American to be named president of a college in the U.S. 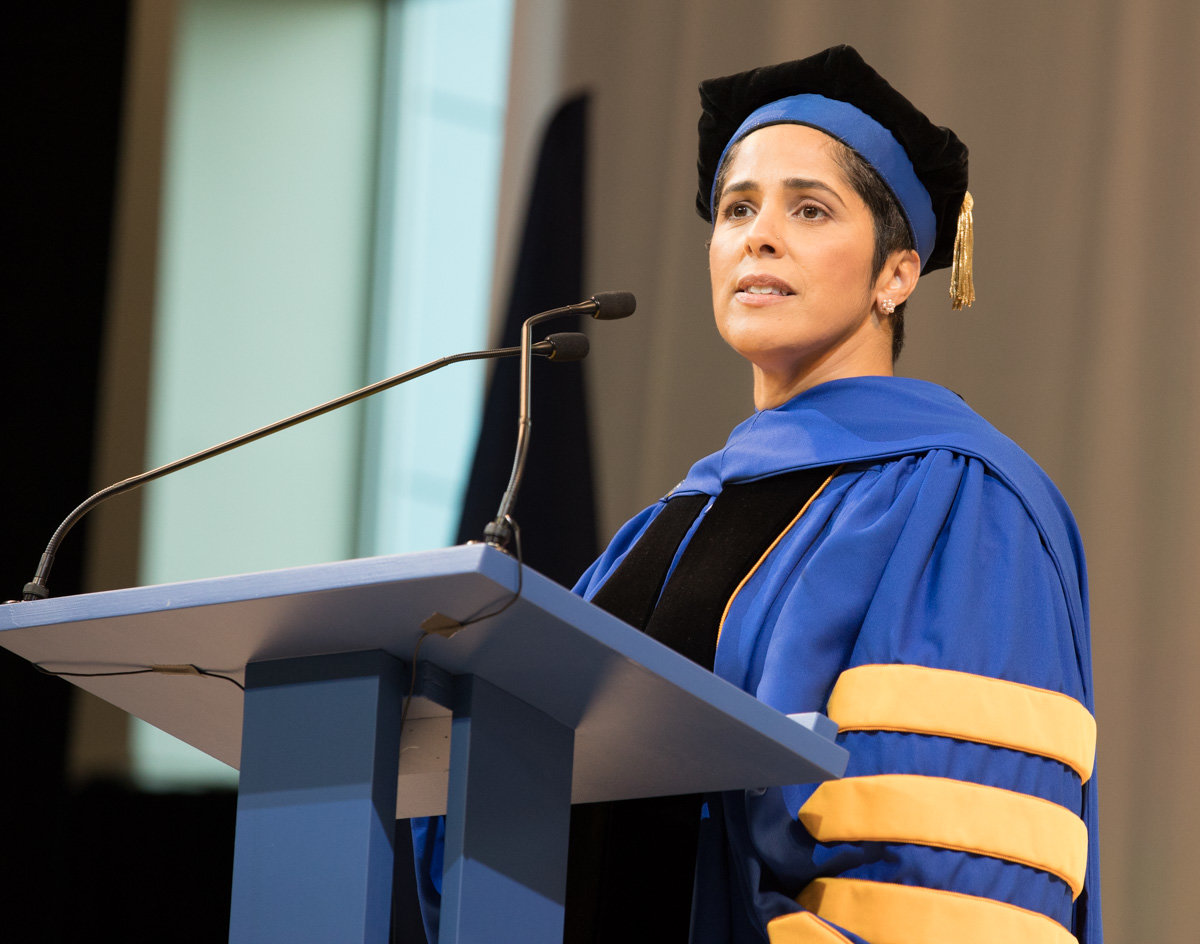 
Board of Trustees Chair Tom Grape ’80 formally installed Collado, placing the symbolic medallion of office around her neck.

In her inaugural address, Collado envisioned an Ithaca College that continues to be a trailblazer in the shifting landscape of higher education and empowers all of its students to learn, grow and serve the public good.

“All of us here have the power to create an exceptional future for higher education and for this country,” Collado said. “This is an incredible opportunity, and we cannot let it pass us by. Let’s work together to advance a vision that affirms our humanity. Let’s be daring. Let’s be confident. And let’s step arm in arm, boldly into the future.”

Throughout her address, Collado drew connections between Ithaca College’s past, present and future. The key to its continuing success, she said, lies in the three educational elements emphasized at the college’s founding in 1892 as the Ithaca Conservatory of Music: theory, practice and performance.

Collado described theory as the underpinning of the pursuit of knowledge. The college’s identity as an intimate, residential college and learning community sets it apart from larger institutions. “Here, we don’t simply study theory. We live it,” she said.

Practice, Collado explained, requires the ability to take risks and challenge long-held assumptions. She said that when institutions of higher learning fail to take risks or broaden their scope, they fail society, perpetuating narrow world views and disengagement.

“In our country right now we are seeing what happens when people hide,” Collado said. “When they act on their fear, their bias, their rigidity of thought. In these situations, there is no creative practice. There is only dogma.”

She noted that many students, such as participants in the Deferred Action for Childhood Arrivals immigration program and first-generation college students, must fight harder for a seat at the table. Ithaca College, then, must provide a “brave space” for all students to practice intellectual inquiry. She called upon the college to build an educational model that tears down barriers to access, as well as barriers to dialogue and shared learning. 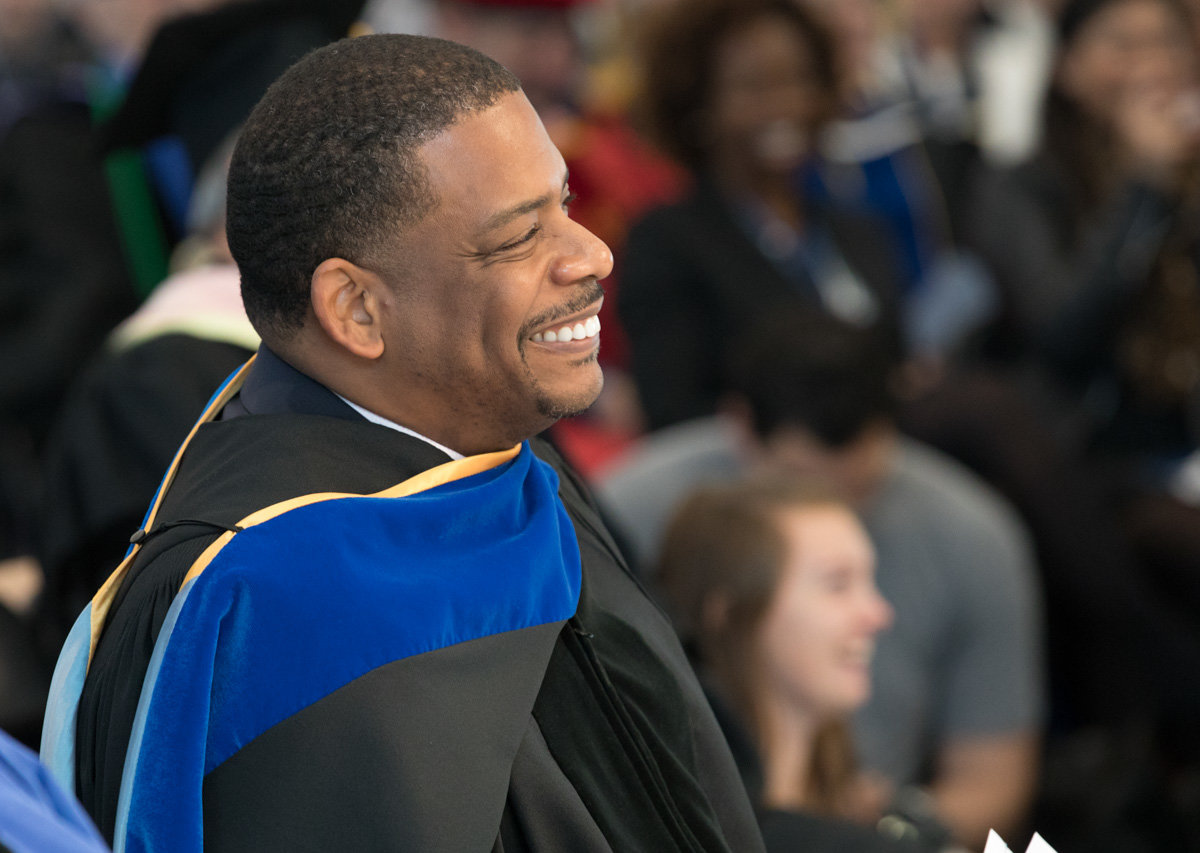 
“When boundaries disappear, we can realize the full potential of a residential college campus where everyone is welcome to practice deep intellectual inquiry, and everyone is empowered to collaboratively create and consume knowledge,” said Collado.

Rooted in its performing arts tradition, Collado asserted, the college must continue to expand its definition of performance going forward, arguing that performing ultimately means taking responsibility for the future and making the world a better place. She called for Ithaca College to be a “private college that truly serves a public good.”

The college can achieve that goal, Collado said, by pursuing an innovative student experience on campus while drawing on its connections within the Ithaca community and its strong alumni network.

“When we scale up these connections, we allow people to participate fully in a broad, active learning community; we inspire the development of bravery, courage, respect, empathy and humanity,” said Collado. “When we do these things — when we perform in this outward-facing way — we build partnerships that change us, and change our world.”

Distinguished Guests Give Praise and Support

Collado’s inauguration was attended by a variety of distinguished guests, including representatives from higher education institutions and organizations from across the country.

They joined with representatives of IC faculty, staff, students and alumni, along with local community leaders, taking turns greeting the new president on behalf of their constituencies.

Collado’s husband, A. Van Jordan, a poet and Robert Hayden Collegiate Professor in the Department of English Language and Literature at the University of Michigan, recited a poem written specially for the inauguration, entitled “How to Celebrate a Revolution.” 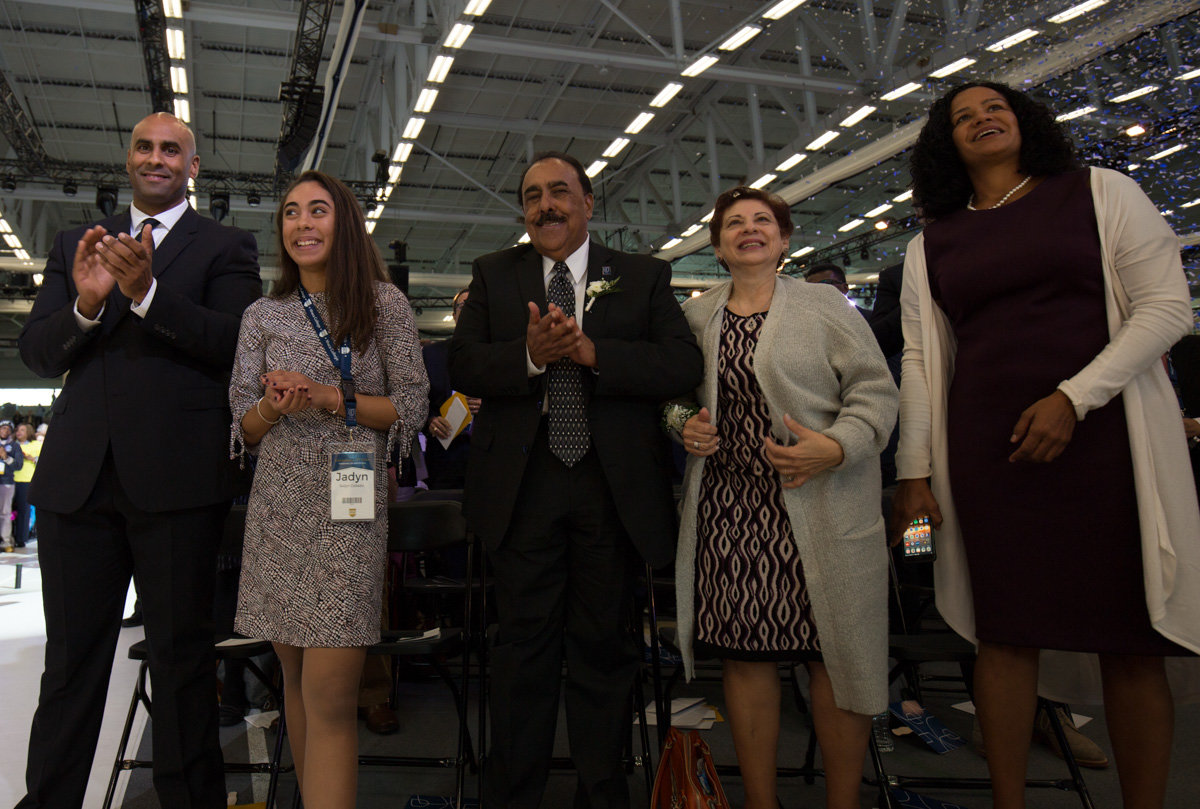 
Jordan was introduced by writer Julia Alvarez, a 2013 recipient of the National Medal of Arts. Collado cited Alvarez as an inspirational figure, and the first author who gave voice to her experience as a Dominican woman. Alvarez praised Collado’s inclusive style of leadership.

“Shirley has broken so many glass ceilings and thereby provided access to that big, blue sky to the many people and institutions she nurtures and inspires,” Alvarez continued. “Hers is not that traditional success model of the self-made individual, out for herself. Shirley has always reached back and wide for the ones who might be left behind.”

Freeman A. Hrabowski, president of the University of Maryland, Baltimore County, who Collado credits as a mentor, spoke about the role of colleges and universities teaching the values of civic engagement, rational thought and critical thinking. He said that it is a responsibility of all in higher education.

“We as educators — not just presidents, but faculty and staff — have this responsibility to teach our students and prepare them to become what [Louis] Brandeis says is the most important role in our society — of being a citizen,” said Hrabowski.

Recollecting the history of Ithaca College, Collado noted that the first graduating class of the music conservatory was entirely female, and that at the time one of the only professions open to women was teaching music. She said she felt a connection with the first known student of color at the conservatory, 1912 graduate Clarice Jones.

“It is difficult to be the first, to open the doors, either as an individual or as an institution,” Collado said. “But it’s necessary.”

“It is an eager anticipation of what will happen next.” 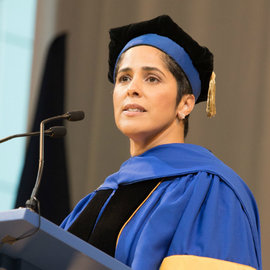