Slug Glue: A Future with no Sutures?

ITHACA, NY—The materials for stitching up injuries and surgical wounds may have changed over the millennia, but the basic process of suturing tissue remains the same. In the 21st century, however, the method may finally become outdated.

“Stiches are a very crude way to put someone back together,” says Andrew Smith, a professor of biology at Ithaca College. Think about it: You’re sewing two bits of skin together. Smith’s research focus is in gels, specifically the gels secreted by certain slugs and snails. It’s the stuff that lets the mollusks stick to wave-battered rocks or stay firmly glued in place when hungry birds try to pry them off and into their gullets.

Modern adhesives also fail when it comes to holding jagged cuts together; they work best when the cut is relatively straight and clean (and not too deep). Smith’s work with slugs and snails, and the work of others researching the biomechanics of creatures such as mussels and barnacles, are paving the way to that day in the not-too-distant future when a needle and suture, or staple, are obsolete.

“Gel like this would make an ideal medical adhesive," Smith says. “It would stick to wet surfaces, and no matter how much the tissue flexed and bent, the gel would flex and bend with it. There would be no leakage or scarring. ”

The secret is in the gel

Snail and slug gel typically functions as a slippery lubricant to help the animal glide across surfaces. Chemically, Smith describes these gels as “a dilute, tangled network of polymers” that are neither a solid nor fluid. He and the undergraduate students who help with research in his lab are examining the internal chemical processes whereby a slug or other mollusk converts that lubricant into powerful glue.

What they’ve determined so far is that ions of metal such as zinc, calcium, iron and copper help create strong cross-links between those polymers, which stiffen the gel. It’s a very quick process: Smith said collecting slugs requires him to deftly flick them into a plastic bag with a pencil, before they realize what’s happening. Otherwise, the slug will secrete its defensive goo and Smith would be unable to collect it.

Once in the bag, the slugs are brought to the lab where they receive a gentle massage on the back to prompt the defensive secretion. Then samples of the glue are collected. The average slug provides about 40-50 milligrams, or half the size of a pencil eraser, Smith says. The samples are frozen for future analysis and the slugs returned to the trails on which they were collected.

By unlocking the secret of these creatures’ gels, Smith sees a future where needle and thread are obsolete in hospitals, medical offices, and even the battlefield. 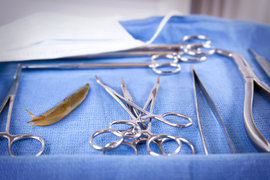