Two Ithaca College students placed as first runners-up in the Washington Media Scholars Foundation national case competition, a contest that challenges students to use real-world data to design a strategic media plan based on a public policy issue. Rising senior Carley Newman and 2017 graduate Ella Sciocchetti each received a $3,000 scholarship as part of their award. 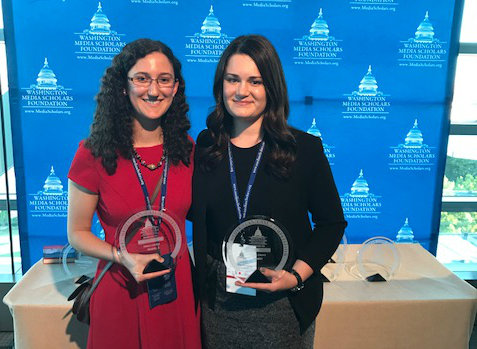 
The two integrated marketing communications majors made it through two preliminary rounds and were one of only six teams selected from across the country to compete in the contest’s final round in Washington, D.C.

Along with the other finalists, Newman and Sciocchetti were tasked by the foundation with creating an eight-week plan to save Herman Cain’s 2012 presidential campaign, which ran into trouble in 2011 after a number of controversies, including a disastrous ad that featured Cain’s campaign manager smoking a cigarette. They set about their task by building a three phase plan: first they would manage the crisis, then they would focus on rebuilding Cain’s image, and finally they would set about continuing a normal campaign.

“In real life, they didn’t really do the crisis management portion,” explained Sciocchetti.

They decided to target the likely Republican voters that Cain needed to win back and, using television index numbers and consumer surveys, focused their efforts mostly on television and radio, specifically news programs. The duo also took advantage of seasonal events taking place at the time of Cain’s campaign—fall 2011—to reach their target group.

“It was throughout the November and December months and we were putting some ads in the Macy’s parades and things like that, because the Republicans over-indexed for watching that,” said Newman.

Newman and Sciocchetti arrived in Washington, D.C. on June 3, and after a week of networking events, tours and working on their plan, they presented their plan before an imposing panel of seasoned professionals on June 8. “It was a bit scary, because some of the judges were digital media planners for the main presidential candidates on both sides,” said Schioccetti. “But it was cool to present in front of them and get their feedback.”

That night, at a networking reception on the top floor of the Newseum, they were announced as the second-place finishers.

On hand to see them accept their award was Assistant Professor Lisa Farman, who taught both Newman and Sciocchetti in her media planning course, and acted as a faculty mentor during the competition. “It was really nice for her to come and support us and it was even better that she was there when we ended up placing,” said Newman.

Farman credited her students for their hard work and success in the competition.

“Carley and Ella used their knowledge about media planning and audience research to create an impressive media strategy, and the judges valued their thorough use of data to back up every claim,” she said. “I'm very proud of their dedication to the project and the skill they demonstrated in creating a professional-level media plan for a real-life client. Their hard work, talent, and preparation helped them stand out from other teams across the country.”

Newman and Sciocchetti were informed about the competition by Scott Hamula, associate professor of integrated marketing communications. He also paired the two together.

“I am so excited for and proud of our Ithaca College team! Ella and Carley worked hard and smart, leveraging their IMC education and creating the second best plan in this, the only national media advertising case competition for students,” said Hamula. “We've done very well in the past, too, with IC runner up teams in 2012 and 2014.”