Words and Music Come Together at Ithaca College Inauguration Event

Music performed by Ithaca College students was paired with readings from a panel of renowned writers on Nov. 4 as part of the Weekend on South Hill, celebrating both the inauguration of President Shirley M. Collado and the anniversary of the founding of the college. 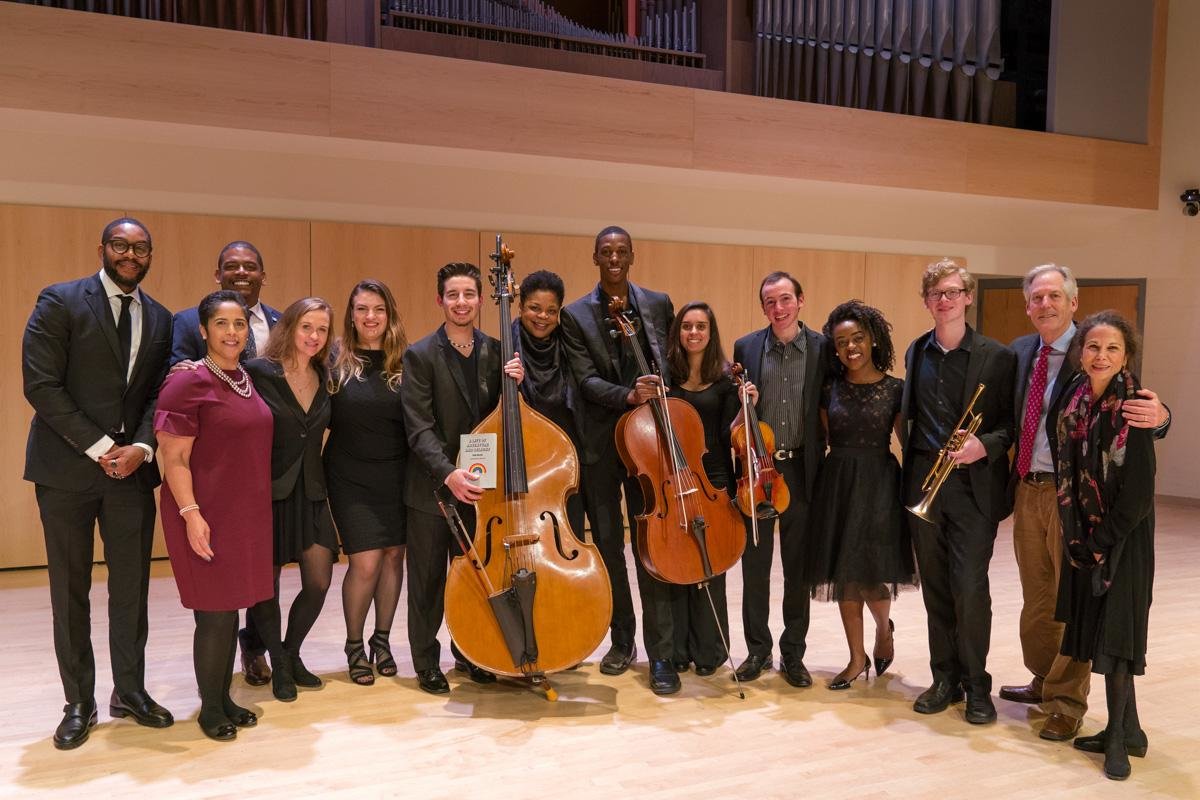 President Collado and A. Van Jordan with the guest writers and student musicians. (Photo by Dave Burbank)


The title of the program — “Circle of Fifths: Words and Music in Celebration of the 125th” — comes from the world of music. In his introduction, School of Music Dean Karl Paulnack described the fifth as arguably the most powerful interval in Western music.

“The circle of fifths refers to the fact that if you start out at any key… and you keep jumping up a fifth, you will move through all of the keys there are and eventually return home again,” said Paulnack. “The circle of fifths is the most common way for us to organize our thinking about the relationships between keys.”

Paulnack said that in preparing for the event, the student musicians read and spoke aloud the texts, soaking in and reacting to the words in the way that composers have done for hundreds and hundreds of years. In addition to using some familiar music, the students created original pieces to be performed during the individual readings and as a bridge to transition from one text to another, “walking us through the circle of fifths along the way.”

“This is not background music,” said Paulnack. “It is a genuine, spontaneous, one-of-a-kind experience.”

The program was moderated by Collado’s husband, A. Van Jordan. A poet himself, Jordan is the Robert Hayden Collegiate Professor in the Department of English Language and Literature at the University of Michigan.


In introducing the panel, Jordan said that he and Collado came up with the idea of bringing five of their writing friends together with musicians from Ithaca College, with the only requirement being for them to recite an excerpt of prose or a poem that fit the theme of celebration.

“Why these five out of all the writers we know? In short, we wanted to bring together five people who we thought made our lives better as a couple,” said Jordan. “They hold a special place in our hearts, and we are excited to share them with you all today.”

Jordan himself read an excerpt from “Cosmopolitan,” a short story by Indian-American author Akhil Sharma, who is currently traveling in Europe and was unable to attend the event in person.

• Julia Alvarez, writer in residence at Middlebury College and a speaker at Collado’s formal inauguration ceremony earlier in the day, read “Spanglish with Mami” as well as the Langston Hughes poem “I, Too, Sing America.”

• Poet Michael Collier, director of the creative writing program at the University of Maryland and a former director of the Middlebury College Bread Loaf Writers’ Conferences, read “Piano in the Woods.” 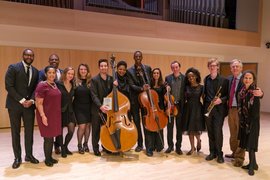