When it comes to choosing a uniform number, many players rely on their position, their heroes, or even their superstitions to pick one. But for the Ithaca College softball team, uniform numbers are an important link between current players and alumni.

For the past decade, head coach Deb Pallozzi, M.S. ’93, has assigned player numbers based on the attitude, attributes, or aspirations of players who came before them.

“Instead of retiring numbers, we pass them on and they honor those players who came before,” Pallozzi said. “When alums come back, it’s always the first question asked: ‘Who has my number?’“

Once the varsity roster is established in the fall, the team captains meet to discuss the newcomers and begin the number assignment process, and then Pallozzi gets final approval.

Monica Capolongo ’15, who was a team captain last spring, said the process helps build team camaraderie. As a newcomer, she was assigned number 22 because her outgoing personality reminded the captains of Kerry Barger ’11 who, like Capolongo, was a catcher.

Current players are encouraged to research the players who have worn the number before them. For instance, Kelly Robichaud ’16, who has the potential to be an all-American, shares number 14 with former all-conference player Annmarie Forenza ’12, all-American Erica Cutspec Kurnath ’08, and Kristen Furdon Nicastro ’02, catcher for the 2002 national championship team.

"Robichaud even met Kurnath at an alumni game. “The advice that she gave me was to be myself and just play the game,” she said. “We talked about academics as well as softball. We've had some really nice conversations." O’Donnell ’13 was given number 10 her freshman year, which had been worn by Hannah Shalett ’07, an all-American and NFCA Catcher of the Year Award recipient. Shalett served as assistant coach at Ithaca while O’Donnell was on the roster, and the two became very close.

“The players take it to heart,” O’Donnell said. “It tells you what people expect of you, and you appreciate the past. It also gets you thinking about what someone is going to think when they get your number in the future.”

The Ithaca College softball team has made 26 appearances in the NCAA tournament including 11 trips to the NCAA World Series and a national championship in 2002. Ithaca has produced 19 all-Americans.

Read more about softball at IC 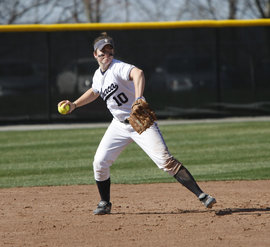 “The players take
it to heart - it tells
you what people
expect of you,
and you appreciate
the past."
– Molly O'Donnell '13 "