A Year At IC

Do you remember your first week at Ithaca College?

Do you remember how excited you were? How nervous? How shy? How naïve? Do you remember how much you changed during that first year? In September, we asked eight first-year students from areas across the college to participate in a photo project. We asked them to bring something meaningful with them to the shoot — a sketchbook, a piece of sporting equipment, an instrument. In April, we asked them to return to the studio and talk about how they had changed during a year at IC. One student went from a reporter to an editor, another took up ballroom dancing, and another participated in a professor’s original research. Here are their stories. 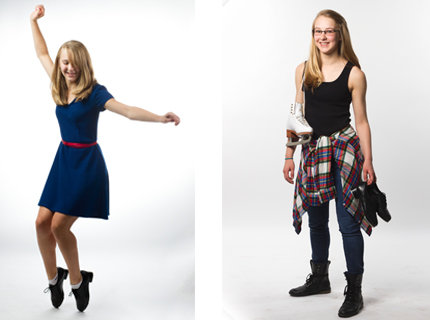 "There’s not a lot of data out there on figure skating injuries and the forces that correspond with them, so associate professor of biomechanics Deborah King started working on building a “smart blade,” which has instrumentation built into the boot to measure force outputs of figure skaters on the ice, which has not been done before. Professor King has been working with a good friend of mine from the Figure Skating Club who told me that she was looking for figure skaters to do some jumps for the Discovery Channel when they came to talk about this smart blade. Of course I was in, because I’ve admired Professor King since I got here. I love biomechanics, since it’s a huge part of my athletic training major, and I think she’s a brilliant professor, so I was excited to work with her."  Watch a video about the "smart blade" project that Professor King and Samantha are working on.

"In high school, I was always bored in rehearsal. Here, I feel like I actually have the opportunity to make music. I went in knowing that it was going to be difficult, but I wasn’t expecting that it would be this much of a challenge. You’re always practicing or trying to get a little bit closer to being a better musician. It’s like running a race and having the finish line move farther away from you with every step forward that you take. But in that sense, I’m still moving forward, and I’m still improving. I feel a lot better about who I am as a musician and as a performer. There’ll be moments where I’ll be listening to something, and I’ll get goosebumps. I guess that’s a response to being in an environment that’s just that good. It’s hard, but it’s worth it."

"On the civil rights tour, we went to Georgia and Alabama and visited the sites and historic places where the civil rights movement took place. We spoke to a lot of amazing people who had taken part in the protests, people who really focused their lives on trying to make a difference for others. It made me realize the amount of sacrifice that people have made in the past for us today. It’s kind of amazing that so many people would have so much love for people they’ve never met before." 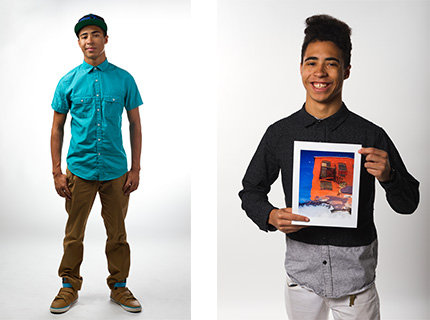 Tyler took Introduction to Photography this year. He’d like to get involved with HiFashion Studios.

"I’d never used the (television) equipment before I came to Ithaca, so my film experience in general was just pretty limited. Anything to give me more technical skills and experience, I’m down for that. I’m working on The Round Table through ICTV, and that’s a really awesome show. It’s all about giving voice to people who don’t really have a voice, and we’re just trying to promote narratives that aren’t really discussed here on campus. I’m shooting camera on that, and I’ve been shadowing the producers as well. So I feel comfortable using studio cameras; I feel like I could work on any show or any shoot now." 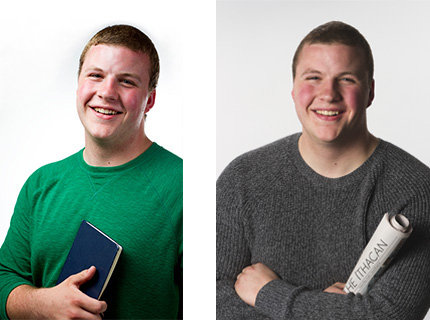 Going into his sophomore year, Max was named assistant news editor for the Ithacan.

"I became involved with the Ithacan because it’s always been my goal to be a journalist, and I believed here was the best place to get started on that. I started as a contributing writer and wrote a couple different stories, one about drones and another about textbook fraud, and from there I became less of an every-once-in awhile writer and more of a person that the Ithacan could rely on. My role evolved into being online news editor in the second semester, and I became more self-sufficient and more a part of the team. I’m not super certain what my future at the Ithacan looks like, but I definitely want to spend all four years working for the paper."

"Being involved in field hockey was a really good thing. I came in with a solid foundation of friends, it kept me busy, and I still hang out with a lot of the girls. One time I remember in particular was when we went on a road trip to New Jersey to play Stevens. In that game I got my first college point. I’m in the Leadership Academy and was elected to the Student Athletic Advisory Council. Through both of these organizations, I’ve met people in other sports, which is great. When we got our final grades for the first semester, that was really exciting because I made the dean’s list and realized all the hard work paid off. Even though I’ve been busy and it’s hard sometimes, it’s all worth it." 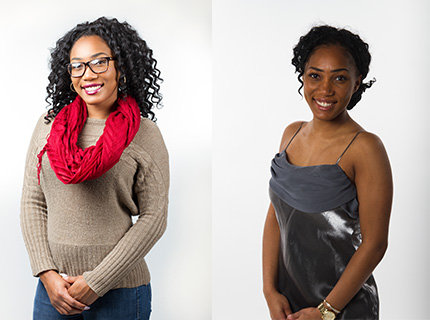 Chanel traveled to Boston in the spring to compete in ballroom dancing for the first time.

"I’ve always wanted to learn ballroom dancing. I went to the organization fair and decided to audition for the ballroom dance team. Usually I’m in sports like volleyball or tennis, so this was something different for me. One day, my friend and I were dancing, and we did the whole song straight through. It was the first time all of what I learned came together. I realized I learned a lot, and I saw how far I’ve come since I started. It made me feel more cultured, which was definitely one of my goals for college. And it definitely helped me with my posture."

Monika talked to her parents almost once a week. Cambodia is 11 hours ahead, so she called them in the morning from Ithaca, after they got home from work.

"Right before Thanksgiving, my seminar professor, Kelly Dietz, asked everyone in our class what our plans were for break. She knew I was an international student, and she invited me to spend the holiday with her husband and friends at her farm. I had never had a Thanksgiving dinner before, so I said yes. I never thought I would be able to share this type of thing with a professor. That experience alone made me consider Ithaca my second home."

Add a comment
Tyler Reighn '18, one of eight students profiled, holding a photo he created during his first year at IC. Photo by Jacob Beil '15

The photographs in this story were taken by Carl Heyerdahl ’16, Jacob Beil ’15, and Giovanni Santacroce; interviews were conducted by Emily Hull ’15, Meredith Clarke ’15, Melissa Dellacato ’16, and David Owens ’15. Giovanni Santacroce created the videos.