Academic Innovation: A Leader in the Lab

Donald Bertolini ’71 hopes his contribution will give more students a chance to learn the ropes of scientific research.  by Khrista Trerotola ’07

Failure. Donald Bertolini ’71 believes in it. As the director of global clinical research on treatment for morbidly obese people at Bristol-Myers Squibb Pharmaceuticals Research Institute in Princeton, New Jersey, Bertolini knows that failure is the key to success.

“In the lab, you fail more than you succeed,” he says. “But failure teaches; you advance from there. It’s normal in research.”

Bertolini’s failures and successes led him to contribute $10,000 — half of which came from the Bristol-Myers Squibb Foundation, which matches charitable gifts for employees — to the campaign. His gift brought the academic innovations initiative to its goal of $6 million and established the Bertolini Endowment, which will fund an annual summer research opportunity for a biology professor and student(s). Who does the research and what it focuses on are up to the department.

“I hope this gift gives students the opportunity to find out if they want to be researchers,” Bertolini says. “You have to do research full-time to know.”

When he started doing research his sophomore year with biology professor Rich Wodzinski, his interest in research as a career evolved into a goal. While most of his peers in biology were applying to medical schools, he was looking at graduate schools. He received his master’s degree from Long Island University and Ph.D. from Wesleyan College, both in biology. “After working in the lab at Ithaca, I realized I’d rather work with rats than people,” he says with a chuckle.

Seriously, though, Bertolini says, “At IC I received a solid background in science — not just in the classroom, but in the real world. A lot of my success has come from the training I had there, even more than where I earned my other degrees.” This is what inspired him and his wife, Maria, to support IC in a philanthropic portfolio that also includes the Make-a-Wish Foundation and a women’s shelter close to their home in Newtown, Pennsylvania.

What he learned at the lab in Ithaca has helped him not only in his career, but in life as well. “How you take the information from one experiment and drive it into the next, and then learn more, is a general thought process,” Bertolini says. “And that can be applied to life, too — for instance, in raising children.”

Bertolini also left IC with his first publication (of many that would follow), on his study, funded by the College Center of the Finger Lakes, of soil bacteria that could break down hydrocarbons (oil). “That first research publication came out of Ithaca,” Bertolini says. “It started my career.”

Now he is happy to offer such opportunity to others. 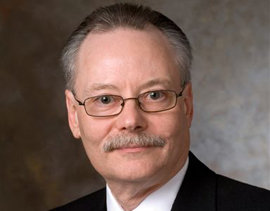 Donald Bertolini says that lab lessons can be applied in life as well.