With a name like Sam Adams, people may wonder if you’ll go into politics. “I always had an overarching goal to one day be the guy the people turn to in tough times for political or policy guidance,” says Samuel Coye Adams ’11, who is actually a distant relative of his namesake, the revolu­tionary journalist behind the Boston Gazette in the time leading up to the American Revolution. He is also related to both presidents Adams.

Adams’s interest in politics had grown during his college years. “If something is not being protested in Ithaca, either world peace has come upon us or the world has come to an end,” he says.

But when a young Sam Adams walked into the of­fice of Republican Senator Olympia Snowe, of Maine, in Washington, D.C., look­ing to score an internship, he had no marketable po­litical experience. He hadn’t even volunteered to stuff envelopes for a campaign.

But he did have swagger. That swagger helped him score his first internship in politics.

Adams, who was intern­ing with a boutique PR firm near K Street, walked the three blocks to the Capitol from his apartment and strode into Snowe’s of­fice. Adams walked out of that office with the email address of the senator’s personal aide, and before long, he had garnered an internship offer. But Ad­ams wanted to do more than answer phone calls and fetch coffee.

So he applied for a different intern­ship with Snowe’s Small Business Committee in Maine. His previous public relations internships and degree in integrated marketing communications from IC made him a strong candidate.

He was hired for the Small Busi­ness Committee internship, and from February until April 2012, he researched, wrote, and helped with document preparation and presen­tation. He read a lot of white papers having to do with small business policy, which he would then inter­pret for the senator to see whether they were policies she would want to promote.

But Adams says his work was more than policy pushing. He found himself researching things the U.S. Treasury Department researched because Snowe was a senior member of the U.S. Senate Finance Committee. In fact, he also researched Snowe’s Q&A portion of a Finance Committee hearing with Treasury Secretary Geithner as a witness.

Adams hopes this is just the beginning of a long political career. He thinks it’s something more young people should consider. Get over the fashionable cynicism and jump right in, he says.

“Find time to volunteer,” Adams counsels. “Immerse yourself in it and when you do, try to make it your central focus. Find something you are good at, and if you are good at communications, volunteer for the PR shop or social media. If you have a background in economics, use that for a policy position. Get involved in local elections.” 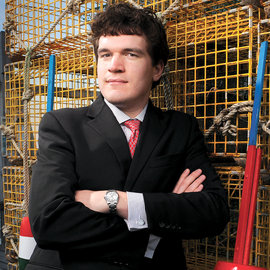