In the mid-1970s, New York City faced bankruptcy. When the federal government refused to bail the city out, landlords torched their properties for the insurance money. “There were blocks and blocks of bombed-out buildings in the South Bronx and areas of Brooklyn,” says Ajamu Brown ’99, a speech communication major and sociology minor.

Today, Ajamu is part of what he calls a “renaissance” in the Bedford-Stuyvesant area of Brooklyn. “All around, gardens are being established, and there is food production going on in my community,” he says. “Many of the gardens were established on lots that had fallen into disrepair or had been abandoned.”

Ajamu credits IC associate professor of mathematics Dani Novak with encouraging and inspiring him early on to give back to his community; the two still keep in touch. After Ithaca, Ajamu continued to do just that. He joined the Peace Corps and left for Namibia, Africa, where he taught teachers in a school system that was in transition and conducted health literacy workshops. He says the experience marked a “turning point” for him.

“As an African American, I know that many of us have a version of Africa in our heads,” he says. “I experienced Africa as it is. I learned about its history — how diverse and complicated that is — and I worked to build bridges and find commonalities with my Namibian counterparts, who were newly emerging from apartheid. They were developing this whole new idea of themselves. Despite the high level of poverty in Namibian culture, there’s still a lot of dignity; they make do with what they have by being very innovative. I was inspired by that.”

After Peace Corps, Ajamu worked for several years on various social justice campaigns across New York City, including serving as lead organizer for a civil rights law firm to prevent hospitals from closing in medically underserved communities. Upon the recommendation of a colleague, he left New York to pursue a master’s degree in environmental public policy at Tufts University. He was developing a keen interest in sustainable food issues and environmental justice, and after graduation, returned to his hometown of Brooklyn to begin work on a public health insurance campaign with the Center for Development of Human Services, on behalf of the New York State Department of Health. As an activist, he sought opportunities to volunteer with other residents who wanted to create a more just and green community and promote food democracy.

In November 2009, Ajamu was awarded a grant from the TogetherGreen Foundation, cofunded by Toyota and the Audubon Society, to ramp up his efforts to engage his community in conservation and environmental awareness. His outreach begins in the place where he volunteers: the Magnolia Tree Earth Center, an organization founded in the 1970s to improve environmental conditions in Bedford-Stuyvesant.

“Bedford-Stuyvesant is a community where issues such as affordable housing and safer streets sometimes overshadow environmental issues,” he says. “Right now, the challenge is to help the community see that those issues are as important as protecting community gardens.”

One way Ajamu approaches this mission is by creating an online map of all the gardens in Bedford-Stuyvesant. Users can click on a particular site and listen to a community gardener share his or her experiences about creating it. The idea is to encourage residents — and decision makers — to think about the community holistically. Storytelling, Ajamu believes, is key.

“There are residents who came to New York who have tremendous knowledge about growing food,” he explains. “When people hear their stories, they can relate them to their own experiences, and these exchanges become the gateway to other efforts to grow food in a sustainable way, create green jobs, and plug into local conservation efforts.”

He sees the garden philosophically as “the entry point” for growth. “It’s a space where poor people can start social networking,” he says. “It’s got something for the kids and something for the adults. It’s the link between those who have the knowledge and those who don’t. People start talking about issues in a personal way that involves culture, promise, and achievement rather than jargon and statistics. It encourages them to move beyond their problems and find a solution.”

That kind of positive thinking, Ajamu hopes, will start to make Bedford-Stuyvesant a safe place to live.

“Two weeks ago, a little girl got shot,” he says. “People don’t think about the problems related to poverty: bike lanes are useless if you’re too scared to ride your bike. We need to create safe spaces in our neighborhoods, and gardens are turning out to be safe spaces.”

This is a wonderful way to promote community awareness, involvement, and networking! A great way to share thoughts about issues in the community and share our diverse cultures as well. Love it! 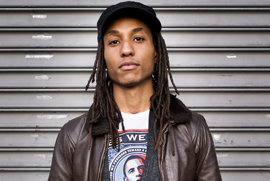