Close to 120 students, alumni, and staff members packed Klingenstein Lounge on Saturday, October 10, to celebrate the 40th anniversary of the African-Latino Society (ALS). In addition to presentations by Sister 2 Sister, Brothers for Brothers, the Caribbean Students Association, Asian Culture Club, and other campus organizations, the program included performances by the Spit That! poetry club, violinist Nicole Wright, and the Amani Gospel Singers.

Among alumni attending the event was Louis Baldwin ’70, who in 1967 cofounded the Afro-American Society, the forerunner of ALS, and served as its first president.

“Back then there were very few black students on campus and no black faculty,” said Baldwin. “We influenced the College, through demonstrations and discussions, to increase the enrollment of students of color through the Educational Opportunity Program, which also began in 1967, and to hire the first black faculty member, Corinne Galvin, in 1969. Also in 1969, the name of the organization was changed to include students of Latin American descent. Recognizing the African-Latino Society’s 40th anniversary is an opportunity to reflect on where the organization has been, its tremendous growth and current success, as well as the future potential for ALS and Ithaca College.”

In 1968, ALS established the Rev. Dr. Martin Luther King Jr. Memorial Scholarship Fund and raised enough money to bring in a black student in September 1969 as the scholarship fund’s first recipient. ALS also spurred the College to include black studies courses in its curriculum.

“I come from the Washington, D.C., area,” says Sayoh Man-saray ’10, an integrated marketing communications major and member of ALS. “The African-Latino Society makes me feel more at home on campus and gives me a forum to express my thoughts, especially on diversity initiatives. IC has made strides in recruiting minority students, but I feel there’s still a long way to go. The African-Latino Society will play a role in that progress.” 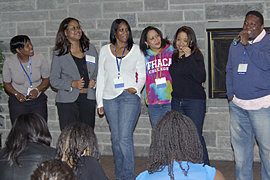 Returning alumni shared memories and experiences with current students at the 40th anniversary of the African-Latino Society.