When it comes to political ideas, you might think of Rob Bluey ’01 as the man behind the curtain. But he’s no Wizard of Oz. And he isn’t a backroom machine politician, party bigwig, or wheeler-dealer.

Bluey is the director of the Center for Media and Public Policy at the Heritage Foundation, an independent, conservative think tank in Wash­ington. The Heritage Foundation, like most interdisciplinary research institutions, employs researchers and writers who investigate major issues and craft white papers that describe the results of their research and frame the thinking on public policy. Sena­tors and members of Congress rely on the foundation’s researchers and writers to give them talking points for the issues of the day.

After Bluey and his colleagues pub­lish their thoughts in white papers, the foundation gets the papers into the hands of the movers and shak­ers who write the laws that shape the nation.

According to Bluey, here’s how it works: “The policy experts come up with an idea and then it goes to the marketing team, which figures out how to communicate it to the public and Capitol Hill, and then a lawmaker takes it through the process to get it into law. My role in that process was initially leading the online team and using social media to communicate the provisions in the policy effectively. Today I’m using my journalism back­ground to tell stories about the impact on real people.”

Bluey began his career as a journal­ist and had his greatest scoop with the biggest political story of the 2004 presidential campaign. As both the Republicans and Democrats marched resolutely toward Election Day, Dan Rather of CBS News ran a blockbuster story slated for 60 Minutes indicating that President George Bush had over­stated his military record. The day after the story ran, Bluey was at work, scouring the documents that were the supposed nails in Bush’s political coffin.

From the start, Bluey knew there was something wrong with the letters in question. They were supposed to have been written in 1968, but Bluey, a former Ithacan editor, believed they were written with a more sophisti­cated typography than was available back then. “It helps to be married to a graphic designer,” said Bluey, who married fellow IC alumna and Ithacan designer Melissa Bloomrose Bluey ’00. “I’ve always been aware of typography.” Less than a day after of Rather’s scoop, Bluey’s story for the Cybercast News Service was the lead story in the Drudge Report.

“It really changed my thinking of the media world because you saw instantly how you could have such a big impact,” he says.

Now at the Heritage Foundation, Bluey is proud to be part of the behind-the-scenes world of American politics. He’s par­ticularly proud of the Repub­lican presi­dential candidate debate the foundation hosted in Washing­ton, D.C., at the beginning of this political season where, he says, the focus was on policy and not person­ality. 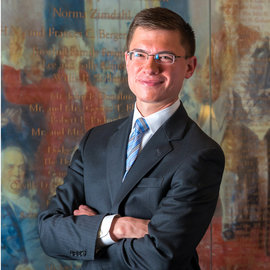