U.S. international trade court judge Eaton and his wife, a museum director, invest in the future of business.  by Kate Larrabee

It wasn’t hard to like attending Ithaca College in the late 1960s,” says Richard Eaton ’70, a judge on the U.S. Court of International Trade. “The campus was new, and the students understood that they were part of an ambitious academic endeavor. At the same time, those were times of great upheaval related to the war in Vietnam and the civil rights movement. Students and faculty held strong views on all sides of important issues, and the campus was not free of turmoil.”

Eaton was an international relations major at Ithaca College. “I had always been interested in government, but my first real introduction to electoral politics took place while at IC,” he says. “In 1968 a couple of us went to New Hampshire to volunteer in the campaign of Senator Eugene McCarthy, who was challenging President Johnson in the Democratic presidential primary. Among other things, we went door to door soliciting votes. You learn a lot from people who want to engage you in political conversation, and from those who slam their doors in your face.”

Writing for the College’s student newspaper also helped sharpen Eaton’s interest in politics. “I liked working for the Ithacan, although I did it for only one year. First, I found that it required me to write succinctly, something I try to do to this day. Second, the discipline of writing made me concentrate on what was happening on campus in 1969.”

The writing skills Eaton developed both at the Ithacan and in his English courses continue to serve him well in his current career as a judge on the national court that hears civil cases brought against the United States regarding international trade. “Most of the cases I hear are appeals from government agencies,” he says. “Each appeal requires a written opinion. I credit Ithaca College, and in particular [professor emeritus of English] E. William Terwilliger, with teaching me the importance of writing clearly.”

Eaton has made annual gifts to the College for a number of years, but says he was inspired by his daughters to make a $25,000 campaign commitment to the new School of Business building. “Both of my daughters recently graduated from college, and I was surprised at the number of their classmates who sought their fortunes on Wall Street. It seems to me that IC students should be prepared to pursue the same opportunities.”

Eaton and his wife, Susan Henshaw Jones, also hosted a campaign event at the Museum of the City of New York, where Henshaw Jones is president and director. “We both were happy to welcome so many Ithacans to the museum,” Eaton says. “For me, it was a chance to get to know people who are as enthusiastic about the College as I am. And Susan is always happy to introduce the museum to people not well-acquainted with it. The museum is a pretty great place.”

The sustainably-built School of Business building opened for classes in January 2008; visit the campaign website to add your gift to that of Eaton and Henshaw Jones. 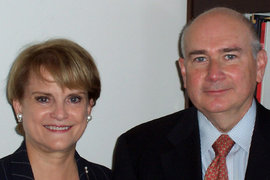