Dan Cassavaugh ’07 is a pretty smart guy; he graduated in December, a semester early, with a degree in journalism. But even so, and even after three-and-a-half years of dealing with the bursar, he still doesn’t know the proper definition of “bursar.” “It’s like the IRS of college,” he says. “If you don’t pay your bills, the bursar will come after you.”

So, what exactly is a bursar? “You wouldn’t believe how often we are asked this question,” says Ithaca College bursar Anne Hyland Woodard ’81. “Yet I’ve never seen it mentioned on Jeopardy!” Which is why she made sure to answer it prominently on her office’s website: “Bursar is a Latin term meaning ‘official in charge of funds’ or ‘keeper of the purse.’ ”

“We’re the folks who bill and collect tuition and fees,” explains Woodard further. A logical next question might be: How does that fit in with financial aid? One would think the two functions would be in the same office, as students often have to sort things out between them. But historically, at Ithaca College and many other institutions, they have been separate; at IC, they’re actually in different buildings—the bursar’s office in Job Hall and financial aid office in Egbert Hall. This has not always sat well with students. “It’s pretty ridiculous when I have to go from the office that handles my money to the one that gives me my money, and they are in completely different places,” says Cassavaugh.

A happy solution is on the horizon: the offices will be merging and moving into the new Gateway Building in the fall. “This makes a lot more sense,” says Woodard. “It will be a friendly setting where students can obtain all their answers at once.”

Finance is not a pleasant matter for most people, but the staff in the newly merged Office of Student Financial Services hope they can help families through the twists and turns more smoothly, giving them a better understanding of the financial aspects of college.

Woodard will be moving and taking on new responsibilities, but the part of her job she especially loves will remain the same. “One of the most rewarding things about my job is being able to help students with financial difficulties successfully complete their education here,” she says. “Knowing that I have provided the tools to help them realize their dream makes it all worthwhile.” 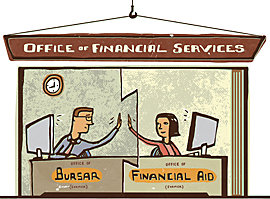