As she took the podium to a standing ovation on the morning of February 22, Shirley M. Collado clasped her hands over her chest. “You’re filling my heart!” she told the large crowd assembled in Emerson Suites. It was a sentiment that ran both ways when Collado was announced as the ninth president of Ithaca College.

Throughout the day in a variety of settings—including two open sessions for the campus community, meetings with student media, and chance encounters while on a walking tour of campus—Collado received enthusiastic expressions of welcome.

Collado has made a career of creating community and building bridges. Whether it’s the bridges between institutions or the ones that expand the pathway for students and faculty into higher education, she has consistently established connections that leave all parties stronger than they were before.

Her track record was one of the main reasons she was unanimously and passionately recommended by the presidential search committee, which was made up of students, faculty, staff, and trustees, after a nearly yearlong search. The IC Board of Trustees was also unanimous in its decision to select Collado.

“In all of our many interactions with Shirley Collado, I was impressed by how forthright and engaged she was,” said trustee James Nolan ’77, parent ’01, who chaired the 15-member search committee. “She is a collaborative academic leader, a strong decision maker, an authentic culture builder, and an outstanding communicator who leans into hard work with great truth. I think she is going to be an absolutely inspiring leader for the Ithaca community.”

Collado comes to Ithaca College from her post as executive vice chancellor and chief operating officer at Rutgers University–Newark. There she developed the university’s transformative, cohortbased Honors Living-Learning Community, which identifies and supports talented students from all walks of life as they work to solve global issues by following an innovative curriculum focused on a “Local Citizenship in a Global World” theme.

Among her signature accomplishments are two initiatives that bring institutions together. In 2016 Collado developed and launched the BOLD Women’s Leadership Network, a national collaboration among Rutgers University–Newark, Middlebury College, Smith College, and the University of California–Fullerton, that develops the leadership skills of college women from all backgrounds. Collado also helped develop and lead the Creating Connections Consortium (C3), designed to enhance interactions between liberal arts colleges and research universities in order to expand the pathway to the professoriate for underrepresented graduate students, including underserved, first-generation, and low-income students. BOLD was supported by a $5 million grant from the Pussycat Foundation and C3 was launched with a $4.7 million grant from the Andrew W. Mellon Foundation.

Prior to her position at Rutgers University–Newark, Collado was vice president for student affairs and dean of the college, and associate professor of psychology at Middlebury College. While at Middlebury, she focused on the student experience and academic initiatives, serving as a driving force behind strengthening the residential experience, spearheading a new orientation program, and enhancing the school’s Center for Careers and Internships.

“The breadth and caliber of her experience in student and faculty development, her strength in large-scale strategic planning, her commitment to shared governance, and her track record of bringing people together to solve problems and get results make her the perfect leader to shape the next chapter of this college’s history,” said Thomas Grape ’80, chairman of the board of trustees.

The daughter of Dominican immigrants, Collado is the first in her family to graduate from college. She was in the inaugural cohort of students to attend college through The Posse Foundation, a nationally renowned college access organization that recruits and trains outstanding student leaders from urban public schools and sends them in teams—called “posses”—to top colleges and universities. Collado later went on to serve as the foundation’s executive vice president.

Collado is married to A. Van Jordan, an award-winning poet. Jordan, who currently serves as the Henry Rutgers Presidential Professor in the Department of English at Rutgers University– Newark, will be rejoining the University of Michigan in the fall as a Collegiate Professor in the Department of English. He also will hold an appointment as distinguished visiting professor at Ithaca College, where he will teach occasional minicourses and master classes.

While she was on the IC campus, Collado asked the community to get involved and go beyond their usual roles. “I will be leaning on you to create a collective vision for the college moving forward,” she said during one of the sessions. “I’ll need and expect your counsel, knowledge, energy, effort, and engagement with me and with one another.”

She added that no one, including she herself, will have all the answers. “But with some courage and openness, and honest investment in this place, I believe that we can mobilize Ithaca College to see its greatest moments yet,” she said. 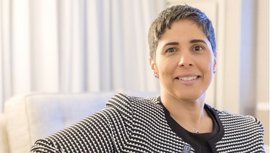