Every year, the National Conference on Undergraduate Research (NCUR) is held at a university or institution to allow students who have conducted original research to present their work. This year, the 24th NCUR was held at the University of Montana, in Missoula, where 23 Ithaca College students were selected to present their findings.

“We have more undergraduates working with faculty supervision on their own research than most institutions of our size and type,” says associate pro­vost Carol Henderson. “It’s a real strength for us.”

Next year, Ithaca College will host the 25th NCUR. With 2,500 people from all over the United States anticipated to be on campus for the conference, scheduling has already begun. Henderson, who also serves as the conference chair for the 2011 NCUR committee, is excited to be able to showcase Ithaca’s student researchers. “We’ve been highlighting ourselves in the framework [of research] for a while,” she says, “but having the conference here presents a much better opportunity for our own students to participate.”

The following students were among the talented IC student researchers who presented their work at NCUR this year, April 15 –17.

Representing the Division of Interdisciplinary and International Programs for the second year in a row, Kasey Stevenson ’10, an aging studies major, says she finds the research aspect the most interesting part of the entire IC experience.

Her research this year, titled “Probing the Inaccuracies of the Mini-Mental State Exam (MMSE) as a Preliminary Assessment for Dementia,” was initiated this summer while she was interning at Harbor House Assisted Living, a residential care facility for individuals with dementia in Oyster Bay, New York. Stevenson recognized that the required MMSE was not accurately representing the individual’s mental status. Stevenson explains that often, after the test is given, doctors have to conduct other tests on their patients in order to get a more complete picture of them. She says that rather than diagnosing dementia, the MMSE merely points to possible signs of a problem.

Stevenson says she enjoyed presenting her research at the conference. “If more people become interested in [this issue], it will get more attention, and [decision makers] will be more apt to change the policy that requires this test.”

Biology major Katherine Noonan ’11 has been working for a year on reconstructing the phylogeny of Gurania, a genus of neotropical vines. The objective of her work is to use molecular data (DNA) and compare it to different species of Gurania, with the intention of finding variations in the gene sequence that will shed light on the evolutionary development of the plant. Since plants are the starting point of food webs and other interactions, Noonan says that knowing the phylogeny of Gurania can provide insight into tropical eco­systems.

“I felt honored to be doing research that a national conference deemed interesting,” Noonan says. “It was exciting to see what other undergraduates are doing as well as meet other people interested in plants.”

In an independent study with assistant professor of strategic communication Cory Young, communication management and design major Kylie Burnside ’10 conducted research in the fall of 2009 on social media, such as Facebook and texting, and its psychological implications on society. Burnside found that social media has shifted from a want to a need. “A person may not connect through these social channels for physical needs or purposes, but social media often provides feelings of belonging, security, and love, which are among the psychological categories in Maslow’s hierarchy of needs,” she says.

Burnside says she sees her research as a way to break into the social media field. “This is a booming field,” she says. “I want to become an expert myself, and doing this project allows me to make that claim.”

Corey Stevens ’11 and Amelia Baran ’11 analyzed Charles Ives’s composition, “The Fourth of July.” Ives’s music borrows from patriotic songs from the Civil War era such as “Yankee Doodle,” “London Bridge,” and “The Battle Hymn of the Republic.” “The Fourth of July” was influenced by the tune “Columbia, the Gem of the Ocean,” which had been under consideration as the national anthem. The students examined the original tune and then applied that to their analysis of “The Fourth of July.”

“He’s from my home state of Connecticut,” Stevens says of Ives. “When I was in high school, I played in a youth orchestra in New Haven, and in my junior year we performed Ives’s ‘Fourth of July.’ Those experiences exposed me to a lot of musical elements I’d never encountered before.”

Stevens says both he and Baran are excited to share the passion they have for this music with others. “Ives is one of the most unique figures in American music,” says Stevens. “His music took old melodies and ideas and created something entirely new from them. I think it’s this mix of history and innovation that really makes him so fascinating.” 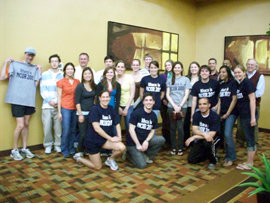