Deans to Step Down

After serving for more than a decade at the helm of one of the preeminent communications programs in the nation, Diane Gayeski announced that this academic year will be her last as dean of the Roy H. Park School of Communications. A 1974 graduate of the school, Gayeski will return to teaching in the Department of Strategic Communication after a fall 2020 sabbatical.

During her tenure, Gayeski inaugurated programs that recognize the critical role media play in society, such as Women in Media Month, which includes the presentation of the Jessica Savitch Breakthrough Award and the Rod Serling Award for Advancing Social Justice through Popular Media, and the John Keshishoglou Center for Global Communications Innovation, which hosts the MS in communications innovation degree program and Media for Social Responsibility mini-courses.

Dean of the School of Music, Karl Paulnack also announced that he would be stepping down as dean at the end of the academic year. Paulnack returned to campus as dean in 2013, after having served on the IC faculty from 1986 to 1998 as an associate professor of piano. During that time he created and directed the school’s bachelor of music in performance– collaborative emphasis degree program. Paulnack’s signature achievement as dean was shepherding the successful reaccreditation of the School of Music by the National Association of Schools of Music, which will run through the 2027–28 academic year 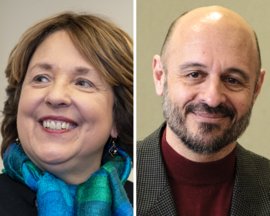