Progressive talk show radio host Thom Hartmann is the first to admit that his kind of programming isn’t news but opinion. For him, it’s all about people—and their stories.

“The brain is a story organ,” he says. “We are story machines. We transmit culture by story. If you can wrap a fact in a story, people will remember it infinitely longer than they would just the simple fact.”

In late September, he broadcast his three-hour daily radio show from the College’s Emerson Suites in front of a live audience. His visit was sponsored by the Cayuga Radio Group and the Roy H. Park School of Communications.

Hartmann says he first developed an interest in radio while driving through the country with his mother and listening to right-wing radicals. “If I want to hear a progressive voice, there have to be other people who want to hear [that] side,” he recalled thinking.

While he believes that news is never totally objective, Hartmann says he tries to remove his personal biases as much as possible from his storytelling. Still, he is fond of describing his program as “fair and only slightly unbalanced,” a play on Fox News Channel’s “fair and balanced” tagline.

Much of Hartmann’s visit was directed toward students interested in breaking into the radio industry. He warned that the profession requires a lot of work: he spends at least two hours of prep time for every one hour on the air and puts in at least 11 to 13 hours of work per daily show. His clear preference is independent journalism.

For aspiring journalists who opt to go the mainstream route, he encouraged them to find healthy outlets to vent their opinions, but also to keep the right balance. 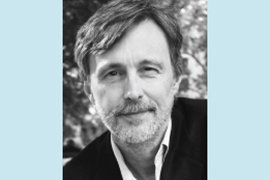