Division III head football coach Glenn Caruso ’96 is scoring with his version of the “play action run.”  by Greg Ryan ’08

Ask Glenn Caruso ’96 how he learned the nuances of complementary play calling, and the new head football coach of the University of St. Thomas credits hard work, long afternoons practicing football on South Hill’s playing fields, and “Bill Walsh College Football ’95,” a Sega Genesis video game. Glenn and his Bombers teammates would play the game every night after practice — “after homework, too,” the onetime sport studies major is quick to add.

If a career average of 32 points per game as an offensive coordinator and head coach, and the cover of American Football Monthly’s August 2007 issue are any indication, all those hours spent playing video games paid off.

Glenn is quickly establishing a reputation as one of college football’s most brilliant offensive minds. After launching his coaching career as an assistant at North Dakota State University and the University of Wisconsin Eau-Claire, he became the University of South Dakota’s offensive coordinator in 2004. In just two years, the Coyotes’ scoring average jumped by 29 points per game. In 2006, Glenn earned his first shot at head coaching with Division III Macalester College in St. Paul, Minnesota. Although he inherited a senior class that had won only two games in its first three years (“I swear they weren’t even that good”), Glenn led the team to six wins in two seasons and boosted its scoring average from 11 to 28 points per game.

Glenn credits much of his success to his version of the “play action run,” in which his offensive players begin select plays as if the quarterback is going to pass, then quickly switch gears and run the ball, leaving defensive players confused and off balance. For decades teams have been using such pass fakes sporadically, but Glenn has made them a focal point of his offense, with play action runs making up 25 percent of his rushing attack.

The system’s stunning effectiveness leaves onlookers wondering from what coaching legend Glenn learned to call plays. “Reporters would always ask, ‘Are you from the Bill Walsh, Steve Spurrier, or Urban Meyer tree?’ ” Glenn says, “I’d say, Nope — I’m from the Jim Butterfield tree,” referring to the legendary Bombers coach under whom Glenn played as a freshman and sophomore.

This fall Glenn will take his offensive fireworks show just down the road from Macalaster, to Division III St. Thomas (where new IC president Thomas Rochon served as executive vice president and chief academic officer for five years before coming to Ithaca). The Bombers’ former starting center says he’ll continue to draw from the lessons he learned during his playing days at IC. “There’s no doubt the concepts I was taught in Ithaca are what allow me to see the bigger picture of the game today,” he says. Video games helped, too.

Glenn Caruso is one of the finest men I have ever met. With his help, I have incorporated the Pass Action Run into my offensive schemes and learned to take advantage of defensive stress values. Thank God there is a man like Glenn to lead the way! 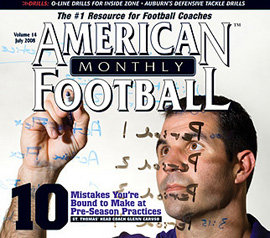 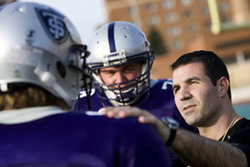 Glenn will get a chance to share his expertise with a new team this year, at the University of St. Thomas in St. Paul, Minnesota.