Last spring, the Ithaca College community lost an active alum­nus and long-time supporter when Michael Serventi ’72 was killed while riding his bicycle in Vero Beach, Florida. He had just left for his daily morning bike ride when he was hit from behind by a car that drifted into the bike lane on A1A. He was 61.

“Mike was an incredibly warm and special person with an un­wavering commitment to Ithaca College,” President Tom Rochon wrote in a message to the campus community. “He made an incredible impact on each and every person he touched.”

A member of the Ithaca College Board of Trustees since 2001, Serventi had retired from the board in May 2011. He was on the search committees for both the current vice president of Institutional Advancement, Chris Biehn, and President Tom Rochon, and he was a driving force behind the fund-raising for the Athletics and Events Center.

“Mike was a wonderful volunteer and I thoroughly enjoyed working with him on the A&E Center,” said Shelley Semmler, former vice president of advancement. “He connected with everyone involved—donors, campaign members, coaches, administration, and trustees. He was instrumental in getting the money raised and the building built. And he did so with respect for everyone else’s role and a big dose of enthusiasm.”

As a student at IC, Serventi was a member of student govern­ment, the President’s Host Committee, and the Interfraternity Council, and he earned a degree in business administration. He received an M.B.A. from Suffolk University in Boston and began a career with Johnson & Johnson in Atlanta.

Serventi returned to New York State to run the family busi­ness, Lew-Mark Baking in Perry, where he had started working as a boy. He eventually sold the business to a larger commer­cial bakery.

Serventi remained active in the business community and as an independent board member of several private and public companies in the financial services, manufacturing, and health­care industries. Serventi was a member of the Perry Rotary Club and the YMCA. He was also involved for many years with the Boy Scouts of America.

Serventi was involved with Ithaca College throughout his life, teaching a course on entrepreneurship in 2001 and serving as a local area representative for the Office of Admission.

His wife, Gail Weir Serventi ’72, survives him. The pair co-chaired the President’s Associates giving club from 1992 to 1997. Gail has been a member of the Alumni Association Board of Directors, and she currently serves as an Admissions vol­unteer at the College in addition her full-time job as a clinical instructor and supervisor at the State University of New York at Geneseo. Serventi is also survived by his son and daughter and their families. 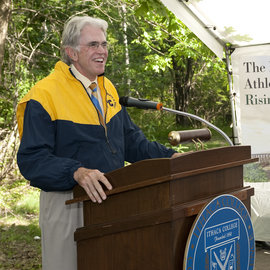