While millions of fans debate whether the New York Giants can win back-to-back Super Bowls, Ethan Medley ponders a different question: What can they do to remain champions off the field?

As the team’s assistant director of community relations, Ethan helps coordinate its outreach and philanthropic efforts — a truly giant undertaking. Each year he helps arrange hundreds of appearances by team representatives. And it’s not just the guys on the current roster who volunteer for the blood drives, school visits, golf outings, and gala dinners. “Former Giants, management, coaches, and family members participate,” says Ethan. “I facilitate the current player appearances.”

The team and its foundation also support thousands of organizations through in-kind and financial contributions. “Our primary focus is childhood physical fitness,” says Ethan, “but we help many important causes, including pediatric health, education, hunger relief, and community improvement.”

Most of those efforts take place in the tri-state area of New York, New Jersey, and Connecticut, but the Giants’ outreach extends across the globe. After the catastrophic Indian Ocean tsunami in December 2004, Ethan traveled with NFL players including Giants wide receiver Amani Toomer to Indonesiaand Sri Lanka to work with the United Nations World Food Programme. “It was the biggest thing I’ve ever been a part of,” says the New Jersey native. “The loss of life, destruction, and basic needs [that need to be addressed] were hard to comprehend.”

Ethan knows there are some who question wealthy athletes’ actual concern for such issues, but he insists their commitment goes far beyond photo ops and oversized checks. “I’m going into my seventh season,” he says. “I know these guys when the cameras aren’t around. For the great majority of them, giving back is something they care about.”

Ethan’s own affinity for altruism and athletics was influenced by his upbringing and furthered by his experiences at Ithaca College, where he majored in sport management with a minor in advertising and public relations, and interned for the Philadelphia Phillies and Atlantic City Seagulls. “Both my parents are ministers,” he says. “I wanted to follow their example of service. At IC, I developed the business acumen to make a career out of engaging myself and others in the community.”

Not to suggest this lifelong sports fan is indifferent to the results on the field. He describes Giants victories as if he personally scored the winning plays, and he gets emotional discussing the recent Super Bowl in Arizona, which he watched from the press box. “My wife, Urbi, and younger brother, Jordan, came with me,” Ethan says. “The game was everything I thought it would be and more.”

Ethan believes he has already found one of his own — but his career will not necessarily begin and end in the NFL. “This is a dream,” he says, “because it allows me to use my day job to perform part of my life’s work. Football is the vehicle that allows me to have that impact, but perhaps someday I’ll find a job outside of sports that will allow me to have an even larger impact on a greater number of people.” 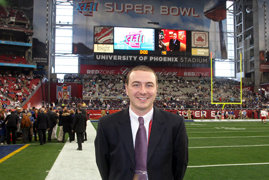 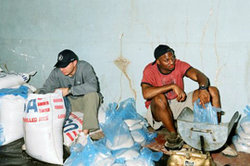