A young alumnus starts a scholarship in gratitude to an administrator who cared.    by Greg Ryan ’08

Tas Hasan ’01 almost didn’t make it to graduation, let alone Wall Street. The Bangladeshi student was out with friends in downtown Ithaca one night when someone accidentally smashed a beer bottle over his head, resulting in a severe concussion and a gash requiring 12 stitches.

For months after the incident, the normally stellar student couldn’t concentrate for longer than a few minutes. “I had six classes that semester,” Hasan says, “and I was ready to quit.”

This spring, Hasan decided to repay Rowland’s kindness by naming a scholarship in his honor. The award will go to an international student in the School of Business who has demonstrated financial need. Hasan’s donation to set up the fund also allowed the campaign to reach its goal for scholarships — of which more than 145 were established during the seven-year duration of the campaign. International students especially need assistance from private scholarships, Hasan points out, because they are not allowed access to most federal and state student loans. Hasan himself received nine scholarships during his time at Ithaca.

And he will not forget that. “As long as you can afford to do it, I believe in giving back to where you belong,” says the newlywed. Thanks to Hugh Rowland’s help and his own hard work, Hasan will always belong to Ithaca College.

I'm really touched by his story. I am glad for what he is doing. I pray that maybe in my quest to gain admission in the school and receive some scholarship, as an international student, I will be a recipient of his. Thank you for the hope Hasan!

Its great how you came out of it! Proud of you. 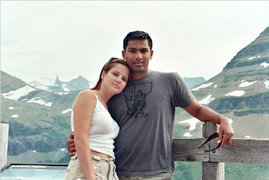