When we first reached Justin Boyette on his cell phone, he was busy tasting wine in California. It was just home-work, really, a matter of checking out the competition.

“I learned that they make a hell of a lot of wine in California and that the current economy has been harder on the California winemakers than on winemakers here in New York,” says Boyette. “I also learned that a lot of the best stuff doesn’t get distributed. You have to hit the wine trail to find it.”

Back at home in Hector, New York, Boyette is swamped with negotiations and paperwork surrounding the launch of his own winery smack in the middle of the Finger Lakes wine trail, in cooperation with Sawmill Creek Vineyards. It will be a fifty-fifty concern, with Boyette himself at the helm, using the vineyard’s grapes to make wines—riesling, chardonnay, pinot gris, cabernet, merlot, sparkling wine, and blends.

“If you took five winemakers and gave us the same grapes,” explains Boyette, “we’d come up with five different wines. This is really an opportunity to make my mark on the local industry. It’s a crowded field, but it’s friendly.” He has worked in the Finger Lakes wine industry for 10 years, most recently as a winemaker for Atwater Estates Winery in Hector.

Hector will also be the site of his winery and its tasting room, where he hopes to sell the majority of the 5,000 to 8,000 gallons he’ll produce annually. His plan is to open by summer 2010.

Even when pressed (no pun intended), Boyette is reluctant to name his absolute favorite bottle of wine, or even to list his top 10. Then he remembers something: “Yesterday a group of us opened a bottle of 2004 Damiani sparkling wine, and it was outstanding.” 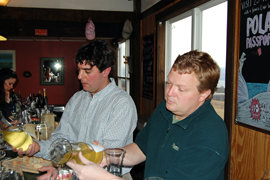