The chair of the Campaign for Ithaca College gives his all — and then some.    by Kate Larrabee

“My wife sometimes wonders who I actually work for,” says Larry Alleva — and he’s only half joking. Alleva has spent 19 years, in total, on the Ithaca College Board of Trustees. Before that, the accounting executive served for several years on the alumni board. Alleva is also chair of the Campaign for Ithaca College: Making a World of Difference.

In his “off hours” from Ithaca College, Alleva is the U.S. leader for ethics and compliance for PricewaterhouseCoopers’ Assurance Practice. “I received an outstanding education at IC, which led to multiple employment opportunities at the time of my graduation,” Alleva says. He chose a job with PricewaterhouseCoopers; in July he celebrated his 36th year with the firm.

That strong sense of loyalty is obvious to those who know Alleva through the College. He has maintained his high level of involvement with IC from almost the moment he graduated. “I got involved via a phonathon two years after graduation, and I’ve been involved ever since,” he says. “Volunteering for the College is one of the most rewarding things I have ever done. It continues to be a source of personal satisfaction — and it’s a great deal of fun.”

During his student days Alleva was a member of the Student Congress, advertising editor for the Ithacan, an intramural athlete, and an officer of his fraternity. Today he chairs the campaign, cochairs the School of Business campaign, and is vice chair of the IC board. He makes regular contributions to the campaign and has even established a trust in his will to benefit Ithaca College. “My wife, Susan, and I are fortunate that we are able to do that,” Alleva says. “Ithaca has had such a huge impact on my life and my career; we wanted to do something that would benefit future generations of IC students. The trust allows us to do just that.”

As a student Alleva made friendships with faculty members that continue. “I still consider [professor emeritus of accounting] Neal Massa and his wife close personal friends and key mentors, from whom I’ve received a lot of wisdom over the years,” he says. “[Professor of economics] Frank Musgrave remains someone I’m in contact with and whom I greatly admire. I also made friendships with faculty members who came to IC after I graduated.”

Alleva’s friendships with fellow alumni remain strong, too. “I didn’t marry until 11 years after graduation, but even so the majority of my wedding party were IC graduates and fraternity brothers,” he notes. “I still count many ICers among my closest friends.” Many of those friendships were formed outside the classroom. “One of the best things about my IC experience was the extracurricular activities — campus organizations and belonging to a fraternity,” Alleva says.

All these relationships eventually led to his decision to chair the campaign. “The chance to play a role in such an important effort has been both a pleasure and extremely rewarding,” he says. “The College’s move to South Hill was one of the truly transforming events in IC’s history. I believe that this first full comprehensive campaign of its kind for IC will be looked upon in a similar way. We will have grown the College’s endowment and scholarship resources at unprecedented levels for the benefit of future generations. The campaign has already resolved a crying need for on-campus, apartment-style housing. In January we will dedicate a building for the School of Business that is unlike any academic building for an undergraduate business program in the United States, and I am convinced this structure will further help IC climb in prominence and attract top students and faculty. And we are making a critical start in raising the funds for an athletics and events center that will be a central gathering point for campus activities.”

Much of Alleva’s satisfaction in leading the campaign has come from watching people reconnect with the College. “Their financial support clearly has been a critical aspect of this connectivity, but it goes much further,” he says. “People want IC to be relevant to them once again. They want to reconnect with faculty and friends, and want to again feel part of Ithaca. They are having fun.”

It should be no surprise that Alleva’s involvement with IC won’t end with the campaign. “I love Ithaca College and will always stay connected,” he says. “The board is currently involved with a search for a new president. So in the near term there is no lack of IC-related things to keep me busy.”

Alleva hopes his own involvement will inspire others. “It may sound corny, but I believe that every single alumnus or alumna should try to give back,” he says. “Some may be fortunate enough to be able to provide financial support. Others may simply give of their time. In my case, it is both, and I really love it.” 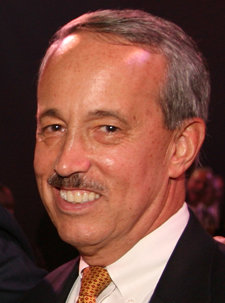