Now in its second year, the Department of Intercollegiate Athletics’ Leadership Academy is training its student–athletes to craft their leadership abilities on the field, in the classroom, and in the workforce. Greg Shelley, associate professor in the Department of Exercise and Sport Sciences, led the creation of the academy and has given leadership presentations to many collegiate athletics audiences. According to Shelley, Ithaca’s Leadership Academy is distinctive because it emphasizes longitudinal development.

“The biggest goal is to build better leaders who will then be better CEOs, better employers, and better employees,” he said. “We are expanding on the perspective of using sport to instill values and traits in a lifelong leadership model.”

Student–athletes in the academy participate in leadership sessions throughout each semester and progress to a new level each year, as symbolized by their motto, “Walk it, talk it, team it.” The first year of the program is dedicated to students leading by example (walk it). During the second year, students learn to vocalize their leadership (talk it). And by year three, students become positive influencers for their teams (team it).

The academy recognizes that there isn’t a one-size-fits-all set of leadership traits. Instead it encourages students to identify and hone their individual characteristics.

“I’m an integrated marketing communications major, and a lot of that entails group work,” said soccer player Holly Niemiec ’17. “Leadership Academy has helped me learn how to delegate, how to work with other people, and to understand my role in a group setting, which will help me in the workforce.”

The academy may also help student–athletes in the short term to secure employment. “This is a head start on competing against other candidates for jobs,” said football player Malik Morris ’16. “Being able to make an impact through communication, through character, and through leading by example — those are the little things the Leadership Academy has taught us along the way.”

About 300 student–athletes are enrolled in the academy, representing all of the varsity sports at Ithaca. 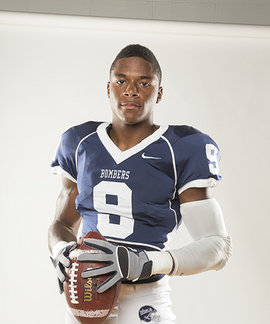