Life in the Fast Lane

Update: On March 25, Jusan Hamilton '13 became the first African-American race director for a NASCAR national series event. Read more. In July 2016, he was promoted to manager of racing operations and event management at NASCAR.

The first vehicle that Jusan Hamilton ever drove was a tractor, meandering around in his backyard in Ithaca. He was three years old.

Now, a little more than a year after graduating from Ithaca College with dual degrees in integrated marketing communications and sociology, Hamilton spends his days rubbing shoulders with the likes of Dale Earnhardt Jr., Jimmie Johnson, and Matt Kenseth.

Hamilton has had a passion for cars for as long as he can remember. His grandfather was constantly tinkering with his vehicles, and during those times he taught his grandson the inner workings of cars and farm equipment. It was Hamilton’s grandfather who had lifted him up into the driver’s seat of the tractor for the first time.

“I remember watching him and helping him work on different projects,” Hamilton says. “He helped me develop my passion for driving and racing, and allowed me to have that connection with motorsports.”

In middle school Hamilton began competing in local races. His first event was at the Starlite Speedway in Trumansburg, where he drove a go-kart around a dirt track. From there his natural ability helped him move up in the sport’s rankings, and, at his peak, Hamilton was traveling up and down the East Coast competing in multiple leagues and events in both go-karts and stock cars.

After high school, Hamilton chose to go to college instead of pursuing an expensive and unpredictable career in professional racing.

“After I realized I wouldn’t be able to race in the top series in NASCAR, I decided that I wanted to work on the business side of the sport,” Hamilton said. “Obviously marketing and advertising are a big part of what makes the sport go round, so that’s what led me to major in integrated marketing communications.”

Once in school, Hamilton’s goal was to get an internship in the industry. He ended up landing three. After graduating in the spring of 2013, Hamilton was offered a job working for NASCAR’s integrated marketing communications department. In May, he was promoted to the position of account executive for industry operations.

Hamilton spends half of his time working out of the NASCAR corporate office in Daytona Beach, Florida, and the other half traveling to different racetracks around the country to execute the event management portion of his job. He works with all stakeholders within the industry, including sponsoring marketing agencies, race teams, track officials, and NASCAR executives.

During the racing season, which runs from February to November and includes 91 events, Hamilton is responsible for the overall management of nearly a quarter of those events, working with television partners, production companies, and radio partners; as well as with the tracks, race teams, and NASCAR officials. He provides event experience opportunities to CEOs of official sponsors, manages trophy presentations, does overall event planning for the NASCAR Sprint Cup Series, NASCAR Nationwide Series, and NASCAR Camping World Truck Series events around the country.

While seemingly unrelated fields, sociology and integrated marketing communications are the perfect combination, according to Hamilton.

“Having that sociology background [has given me] an open mind and helped me understand different aspects of society,” Hamilton said. “It allows you to better interpret what you’re putting out there, how it’s going to affect different groups of people, and how they’re going to see it. From a public relations standpoint, sociology is really useful.”

Although he has come a long way from riding tractors, Hamilton doesn’t forget the man who first inspired him. 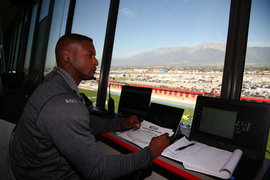 "From a public
relations standpoint,
sociology is
really useful." 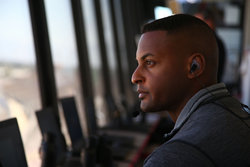