Take a fond memory, throw in a touch of learning, add a lifelong friend, meet students — and you have Ithaca’s first Alumni and Homecoming Weekend.  by Keith Davis

A campus tour guide during her student days, Helen Peck Legato ’89 knew her way around IC. But the campus has changed a lot since Helen was an undergraduate, and she came back for Alumni and Homecoming Weekend this past October to see for herself.

“I’ve stayed connected with the College and still work with the admission office,” she says. “But this year was my 20th reunion, and I wanted to see the campus from a current student’s perspective.”

The newly dedicated Peggy Ryan Williams Center was incredible, Helen said. So was the year-and-a-half-old Dorothy D. and Roy H. Park Center for Business and Sustainable Enterprise. The most impressive thing, though, was something that hadn’t changed.

“Driving in from Owego, coming over the crest of the hill on 96B and catching that first glimpse of the lake still gives me goose bumps the way it did 24-and-a-half years ago when I first came here,” Helen says. “The first time I saw that beautiful sight, I turned to my mom and said, ‘I’m going to come here. This place is for me.’ That feeling hasn’t changed. Every time I come over that ridge and see the lake, I feel like I’m coming home.”

More than 750 alumni and their guests, students, faculty, and staff joined Helen in returning to South Hill October 8 to 11 for Alumni and Homecoming Weekend. For many, it was a mix of past and present, but all of them experienced something new — this year, for the first time, Homecoming (previously held in the fall) and Alumni Weekend (previously held in early summer) took place at the same time.

“The theme for this historic occasion was ‘Make It Yours,’” said Brenda Carlisle, events coordinator in the Office of Alumni Relations. “Our focus was to create a schedule that would allow alumni to tailor the weekend to a perfect fit. We wanted to provide them with a variety of ways to have fun while also reconnecting them to the College in personally meaningful ways.”

Fun was definitely on the mind of Ryan Engels ’06 and his wife Stephanie Egan-Engels ’06, who live locally in Brooktondale. Ryan, in fact, works in the College’s Technology and Instructional Support Services department.

“We were looking for things to do, and Alumni and Homecoming Weekend was right here,” he said. “The football game, the wine tasting, and the Big Bash were high on our list.”

Meaningful connections were also high on alumni’s lists. Jon Howard ’89 — an outside linebacker on the 1988 national championship team—traveled from Ohio with his wife and two daughters to meet his father, Nelson, for the football game.

“He’s a big football fan, and it meant a lot to us to see the 1979 national championship team introduced during halftime,” Jon said. “I also wanted to come back to show my daughters where their dad went to school.”

Hector Vera ’89 also has teenage daughters. He came back to celebrate his 20th reunion — and to plant some seeds. “I want my daughters to experience the College firsthand,” he said. “I want them to see the place where I had so many wonderful experiences.”

Not everybody was celebrating a reunion year. Five months after graduating, Cornell Woodson ’09 was back on campus from Atlanta, where he works in the Teach for America program.

“I was 18 when I first came to Ithaca, and this is where I grew up,” he said, recalling the life lessons he learned as a student that guided him as an adult. “The College allowed me to get involved and understand what responsibility is. Now that I’ve graduated and am in a real-world situation, I can say, ‘No problem. I’ve been there, done that before’ — at Ithaca.”

Sometimes having fun and reconnecting were one and the same. Ken Melech, Doug Hunt, Mark Aresco, and Rick Sharp — all from the class of 1974 — come back every five years. They visit old haunts, recall special times like watching the draft lottery with crossed fingers, and make cryptic references to a certain artistic achievement that had something to do with a snowman sculpted in the style of Michelangelo’s David. “Starting out as a bunch of kids in an all-freshman dorm, we became friends the day we walked onto campus in 1970, and we’ve been friends ever since.”

“We wanted to give alumni a chance to be on campus when the students were here because the exchanges that occur between alumni and students can be very rewarding,” said Gretchen Van Valen, M.M. ’93, director of alumni relations.

That worked for Ken. “I can still come to Ithaca and learn something,” he said.

I just wanted to agree with the statement about seeing the lake and the awe inspiring feeling it gives. I also "grew up" at Ithaca College and it was the best experience I have had. Ithaca is the place to grow and learn. Go Bombers!! 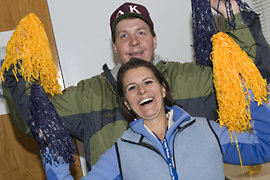 • Return of the Killer Doorknobs

• Alumni Leaders in the Financial World Report on the Economy

• Class of 2010 Remembers Classmate with a Scholarship