Confessions of a Risk Taker

A career in filmmaking can be rocky. The key is to turn the bumps into benefits and the ruts into revelations.

That’s exactly how cinema and photography alumna Marlene Rhein has negotiated writing and directing films, from her early days at Ithaca College to the screening of her first feature film, The Big Shot-Caller, in New York City in May 2009.

“It’s this crazy up-and-down thing,” says Marlene with a tone of affection and jest for a medium and an industry that excites as much as it incites.

After graduation, Marlene left Ithaca College with every young filmmaker’s ambition to make it in Hollywood. Drawn to characters who find inner strength during times of adversity, she wants her stories to “alleviate people of their sense of loneliness and isolation” and “inspire and uplift.” She does this by creating realistically flawed characters whom viewers can identify with. However, after accumulating a “huge” credit card debt shooting films, she discovered how difficult it is to get studios to back a less mainstream, less action-packed project.

“Everyone is so risk-averse,” she explains. “To get a movie made without some kind of high-concept, low-intelligence, star-driven thing is so hard. The independent route is the only way to really get your stuff out there the way you want to tell it.”

Leaving the big-budget movie scene to try her hand as an independent filmmaker in New York City, Marlene started writing scripts by day and waitressing by night.

“There is nothing more exhilarating and amazing than sitting in a cafe, which I do a lot, and writing in a notebook. I handwrite every-thing — I am super old-school,” she says. “You write something that makes your heart so full, and you think, wow, if I could just reach people with this story.”

That’s how she wrote her first feature-length screenplay — a character-driven story, loosely based on her brother, about a social misfit with low self-esteem whose passion for salsa dancing and determination to succeed at it rekindles his confidence and begins to transform his life. With some creative collaboration and relentless fund-raising, Marlene began shooting The Big Shot-Caller.

“When you’re on set and 30 people are there making the vision that you wrote in a corner of Starbucks happen, that is why I do it,” Marlene says. “The reason I go through hell is to get those moments.”

Another reason she does it: watching a packed audience stand in cheering ovation, as they did when her film premiered at the 2008 Sedona Film Festival. “I can’t tell you the high, the electricity you feel when 200 people are sitting in an audience really affected by your film,” she says. “It was so amazing.”

After opening in New York in May 2009, The Big Shot-Caller landed a mixed review by the New York Times and made it into the Netflix library, garnering a three-plus rating.

“If you’re a sensitive person going through this for the first time, and you don’t have thick skin, it will almost debilitate you,” Marlene says about dealing with criticism. “You doubt yourself so much. With every rejection letter or every distributor that doesn’t return your call you feel like, ‘Is it me? Is it my film?’

“The only answer I’ve come up with is to reconnect to your love of creativity, not what you think people are going to think about your work, not to impress critics, not to impress anyone. And, to remember it’s an inside job. Is this story successful in your heart? If it is, then it’s a success. That’s what gives me the motivation to write the next script.” 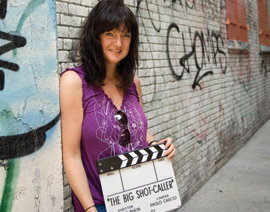